Home In This Edition Coca growth up by 44%

A UN report released on Thursday July 2 revealed that Colombian coca cultivation grew significantly in 2014, and cocaine production saw an even higher increase.

According to the report entitled ‘Coca Crop Census 2014’, the area being used for coca growing shot up by 44 percent, leading to an estimated 52 percent increase in the potential annual production of cocaine in Colombia.

The annual report, based on satellite images, shows that the area of coca bush cultivation went down in regions like the
Amazon (South), Orinoco (East) and Sierra Nevada (North), but had increased in parts of the Pacific (West) Putumayo-Caqueta (South) and Meta-Guaviare (Centre-east).

Ricardo Restrepo, director of the Anti-Narcotics Police, said in the daily El Tiempo that there is a high presence of illegal groups in areas with the most coca, including FARC guerrillas, the ELN, and criminal gangs, such as the Clan Usuga.

Justice Minister Yesid Reyes commented that “the crops are in areas where it is very difficult to carry out state intervention” and noted that it partly explains the increase in the number of coca hectares planted.

The increase calls into question the effectiveness of Colombia’s 10-year-long, US-backed aerial crop spraying campaign, which was recently suspended, and is currently winding down. 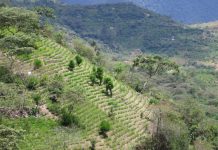