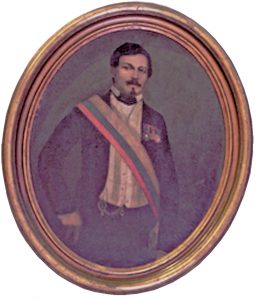 With the presidential elections falling during the month of Afro-Colombianidad, we take a look a little-known part of the country’s history: Colombia’s black president.

As this year’s month of celebrating Afro-Colombia happens to coincide with the country’s presidential elections, we thought it would be a good time to reflect on how Afro-descendants have featured in the higher ranks of Colombian politics.

Indeed, a look at the list of past presidents reveals a long line of fair-skinned and rather aristocratic-looking men, which, in a country as diverse as Colombia, does come across as slightly odd.

But this, sadly, should come as no surprise, as Afro-Colombians are conspicuously absent from the upper echelons of a society that remains strictly divided along class lines. It is very rare to see more than the odd spattering of people from this demographic walking around the posher neighbourhoods of the capital. It’s equally rare to see Afro-Colombians represented in the media – either in magazines or TV.

However, taking a deeper look, scratching around for historical curiosities not commonly covered in mainstream books, one discovers what appears to be a whitewashing of the past: Colombia’s first (and so far only) black president has been all but erased from the history books.

Juan José Nieto Gil, born at the beginning of the nineteenth century, held office for a short time in 1861. While it is not known why he is not mentioned in any textbooks, it is commonly assumed he was erased because he was black.

Others argue that the reason for the omission is that his mandate was so short, only lasting six months, between January to July of 1861. But this theory falls flat when one considers others such as Víctor Mosquera Chaux and Carlos Lemos Simmonds. The pair held office as interim leaders for eight and twelve days respectively, yet receive their dues in the history of heads of state, and have their portraits hanging alongside other leaders in the presidential gallery.

The curious story of the forgotten president was only picked up by Colombian mainstream media ten years ago. The revelation came after Colombian historian Orlando Fals Borda discovered a portrait of Nieto Gil tucked away in the Palace of the Inquisition in Cartagena.

Fals Borda had already pieced together the life of Nieto Gil, and the oil painting merely added weight to his findings. However, it was only after the historian’s death in 2008 that his research was given light and mainstream media began reporting on the existence of the country’s first black president, some three decades after the painting was found.

As if it wasn’t enough that Nieto Gil’s political existence had been erased from records, his portrait was also sent for retouching, making him appear whiter than he does in the original.

However, being the country’s first black president is not Nieto Gil’s only claim to fame. He also doesn’t get credit for being the first novelist in the country. If you can find a copy somewhere, look out for one of his masterpieces: Ingermina or La hija de Calamar.