Latin America has been hit by an outbreak of Zika, a virus transmitted by mosquitos which now affects 23 countries in the region. On an International Health Regulations Emergency Committee on February 1 the World Health Organization declared the Mosquito-borne Zika virus an international public health emergency.

WHO Director-General Margaret Chan stated, “A coordinated international response is needed to improve surveillance, the detection of infections, congenital malformations, and neurological complications, to intensify the control of mosquito populations, and to expedite the development of diagnostic tests and vaccines to protect people at risk, especially during pregnancy.” Further measurements are expected in the following days.

Speaking to the Community of Latin American and Caribbean States (CELAC), President Juan Manuel Santos aired his concerns, explaining that “a total of more than 170 municipalities and more than 14,000 people are already contaminated with the Zika virus. Calculations are that if the epidemia keeps growing like it is growing now, 600,000 people in Colombia could be affected.”

“We have taken the decision in the CELAC to gather all the health ministers as soon as possible to share our experiences and information,” Santos added.

Health minister Alejandro Gaviria commented that around 1,000 pregnant women had been found to have contracted the virus.

In a controversial statement released earlier this month, the ministry urged women not to get pregnant, as a measure to reduce the risk of unborn infants contracting microcephaly. The Zika virus is strongly linked to microcephaly – in which an infant is born with a small head and often a deficit in brain development. Debate continues as to whether mothers who have contracted the disease should be allowed to consider abortion. 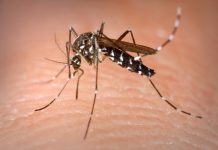 WHO: Zika virus ‘spreading explosively’ in the Americas