With a growing deficit in the public education budget, tens of thousands of people participated in education protests on October 10 that marked the start of a ten-day national education strike.

Forty thousand people took to the streets in Bogotá yesterday to demand solutions to the public education funding crisis. Chants like “Quiero estudiar para transformar la sociedad” – I want to study to transform society – rang out through the city centre as students and teachers marched for change.

At two pm, the demonstration moved along the septima to reach Plaza Bolívar where a few thousand people were already waiting to join final moment of the march.

With just ten days to go before the 2019 budget goes before congress, the academic community wants the government to significantly increase the budget for public education. While a total of COP$33.6 billion has been put aside for education (more than previous years), the reason so many people braved the rain on October 10 is that only 10% of that is slated for public education.

The central message on the streets was a demand to increase the budget for public education. “We are here to call for the return of what is ours,” said 19-year-old student Gabriela Peña from the Universidad Militar Nueva Granada, referring to a budget which was, according to her, cut by the government of Manuel Santos.

Organised by the national student’s union Unión Nacional de Estudiantes de la Educación Superior, it was one of several demonstrations that took place throughout the country, with Medellín, Cartagena and Cali also joining the fray.

During the event at the Plaza Bolívar, special attention was paid to Gustavo Petro. The former mayor who lost in the second round of this year’s presidential elections was announced as “our president” and the enormous crowds fell silent as he spoke. Petro re-iterated the message that campaigners had carried through the streets: We should spend money on education, not on war. He criticised the government of Duque for doing exactly the opposite by increasing the defence budget.

While there was some damage to TransMilenio buses and stations, overall the protests were peaceful. The district secretary for security, María Lucía Upegui stressed that their had been no arrests and that the students themselves had cleaned the vandalism.

A nationwide academic strike will continue until October 21 as the academic community express their frustration with the situation. 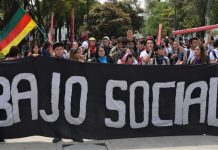 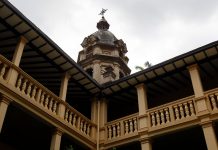