For the first time Colombia has 5 official locations for the Global Game Jam, a game development marathon taking place in more than 100 countries around the world.

The Global Game Jam (GGJ), which runs from January 25 to January 27, is an annual game development event which has been going since 2008. This year marks Colombia’s tenth year as an official venue, and five locations throughout the country will be taking part: in Bogotá the Corporación Universitaria Taller 5, in Bucaramanga Coworking Labs, in Medellín Universidad Pontificia Bolivariana, in Barranquilla the Universidad del Norte and finally in Pereira the UNITY headquarters.

Inspired by the Nordic Game Jam, the GGJ was created in 2008 by Susan Gold, Ian Schreiber, Gorm Lai and Foaad Khosmood as a two-day event to gather elements of creativity, collaboration and experimentation. Ten years later, in January 2018, the GGJ took place in 803 locations in 108 countries, where in the course of a week 8,606 games were created.

“For us it is very important, as part of the industry, to support these creative meetings” says Antoine Dubois of Below The Game, who, along with the local Chamber of Commerce, runs the Bucaramanga event. “It’s a way to support the city and generate spaces for developers to meet.”

“The Game Jam is a chance for developers to create content that they would have otherwise not have the opportunity to create, and also network with other creators, and receive real-time technical support to accelerate learning” explains Ricardo Arango, Support Manager and Office Manager of Colombia’s UNITY office. “Not only will the technical support cover Unity, but we will also offer support for other platforms as well.”

In each headquarters, the participants meet face-to-face to develop ideas, form teams, put together new, creative and innovative games and present them to their peers and the global community, all in a limited period of time: only 48 hours.

“Taking care of a large number of participants when you are not a hotel is a difficult task” says Joseph Robert Olin, coordinator of the Pontificia Bolivariana University’s video game design programme. The Medellín event had 200 participants last year, and is preparing to receive around 220 this year. “But we make sure we comply with the necessary requirements for a comfortable and safe stay. According to the safety guidelines, we can have a total of 300 people in the university’s coliseum, and although we are still far from that number, we always ensure we can maintain safety and order.” Medellín has the highest number of participants in Colombia and the second highest in South America after Sao Paulo, where more than 400 GGJ participants take part. And the most popular worldwide GGJ event? Cairo, with 2,000 participants in one location.

What you need to enjoy the GGJ

The locations usually provide space and resources such as electricity and internet for you to enjoy your time there, but during the Jam you need to take the equipment and materials necessary for the design of your game. Additionally, it’s recommended that you pack your toiletries, clean clothes, blankets or/and sleeping bag. Although you’ll be in an indoor location, you will practically be camping out there: due to the short time available during the event, you don’t want to spend it travelling between locations.

The only condition to attend is to pre-register on the official GGJ page for each event in order to reserve your space. Some locations carry costs while others are free, but the equipment and materials necessary for game development are up to the participants themselves.

Sandra Castro is a social communicator who graduated in journalism from the Universidad Externado. She is the founder of Tan Grande y Jugando (TGYJ), where she works as a journalist, Vlogger, gamer and researcher. Sandra is currently working towards her master’s thesis in political communication, with a plan to support the video game developers in the country.﻿ 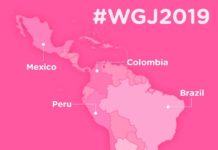 Women’s hackathon arrives in Colombia with the Game Jam