Budget supermarkets D1, Justo y Bueno and Ara have made their presence felt on the streets of Bogotá. But behind the discount products, there are some heavyweight legal battles going on, as Emily Hastings finds out.

There’s a retail revolution taking place in Colombian shopping baskets. In the last few years, “no frills” budget supermarkets such as D1, Justo y Bueno and Ara  have increased their presence to the point that you can’t walk far in Bogotá without seeing a budget store.

Hard budget supermarkets have been around for decades in Europe, especially in Germany where the pioneering Aldi and Lidl stores originated. However, budget grocers began opening their doors relatively recently here with D1 opening its first store in 2010.

These discount shops are going against the grain worldwide and managing to make profits in difficult markets. In the UK, the combined market share of Aldi and Lidl rose from 6.7% in July 2013 to 10.7% in January this year, according to an article in Management Today.

Low costs – at all costs

In Colombia, last year’s tax reform included a hike in VAT to 19%, the peso has dropped sharply in value versus the US dollar over the past four years, and inflation has risen – to a peak of 8% in mid-2016. It’s no surprise, therefore, that cheaper products catch the eye of the consumer.

The low cost budget supermarkets manage to maintain lower prices by rigorously reducing costs at every stage of their operations. One strategy is to have smaller, more practical stores. A press communiqué from Valorem S.A. explained: “Store layout is designed to reduce costs of logistics, transportation and publicity. Savings are passed on to the consumer, through lower prices.”

Efficiency is the name of the game in the hard discount retail business, and that includes keeping staff numbers to a minimum. Budget stores also have ‘no-bag’ policies (if you haven’t brought your own, in D1 and Justo y Bueno, you’ll need to buy a reusable one, and the displays are functional and no further.

A key aspect to hard discount stores is that many lines are single brand, single product: you’ll only find one brand of coffee on sale in D1 and three in Ara, compared with about 15 in an average Carulla. By maintaining a much more limited product range they can significantly lower operating costs.

Limiting the product range is key because it gives the shops more negotiating power when dealing with suppliers, enabling them to bargain for better prices. And it is those all important relationships with suppliers which are at the heart of an ongoing battle between D1 and Justo y Bueno that has been rumbling on since last year.

Koba’s D1, who were the first to market, already have 600 stores and continue to pursue an aggressive expansion plan. According to Dinero magazine, the chain grew by a 100% in 2016, reaching reported revenues of USD$740 million for the year.

Mercadería S.A.S’s Justo y Bueno opened their first store in February 2016, and have expanded rapidly. According to their website there are 234 stores across the country and the company has said they plan to take that number to 500 by the end of the year. They reported profits of COP$229,800 million in 2016 and are projecting revenues of COP$1 trillion for 2017.

In such a profitable market, the competitors have let their teeth show. In March 2016 Mercadería S.A.S. filed a complaint of unfair competition with the industry watchdog, the Industry and Commerce Superintendency (SIC) alleging that, Koba, the owners of D1, were pressuring suppliers not to sell to them.

Three months later, the SIC ruled with what Dinero calls ‘precautionary measures’ against Koba, ordering them to refrain from interfering in any way with business relationships that may be in progress between Mercadería S.A.S. and other companies.

Meanwhile, this year Koba filed their own complaint with the SIC. According to Portafolio magazine, they alleged that former D1 employees who are now working for Justo y Bueno took confidential information about D1’s suppliers.

However, the SIC dismissed this case on March 16 this year on the basis that the information provided did not constitute a business secret.

The quarrel is further complicated by the fact that the owners of Justo y Bueno were the original founders of Koba before they sold their stake to Grupo Valorem.

What all three chains no doubt agree on is that the hard discount retail market has enormous potential. Each has ambitious plans to continue to dominate the market by opening more and more stores.

Camilo Herrera, president of consulting firm Raddar, told Dinero, “the trade ecosystem in Colombia is changing; there is a new buyer looking for the lowest price possible in categories of mass consumption, taking advantage of the quality of low-priced brands, which is very close to that of the recognised brands.”

And a number of analysts have raised concerns that those worst hit by the these discount newcomers will be small traders and family businesses, stirring fears that the budget supermarkets will undercut local corner shops.

As all the companies are hoping to continue to grow exponentially, what does seem likely is that  they will face tougher competition on both sides of the scale. Perhaps the real battle for Justo y Bueno and D1 will be when the established supermarkets wake up to their shrinking share of the market. 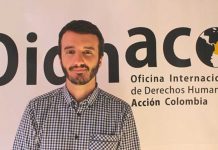 Paramilitary activity: ‘Government must recognise problem and fight it’