The snow-capped southern Andes just outside Santiago de Chile provided a stunning backdrop to the South American Championships (SACs), where Colombia’s national cricket team made its debut in the 20/20 tournament. Although the team was unable to bring back the title, wins against Perú and defending champion México ensured Colombia made its presence felt.

Argentina, the traditional powerhouse of Latin American cricket, enjoyed a comprehensive victory over Brazil in the men’s final, earning them the well-deserved regional champions’ crown.

In their first game, Colombia posted an imposing total of 177/5 in 20 overs thanks mainly to a classy 91 from South African-born Chris Laas – who was later named the tournament’s best batsman – and a blistering 51 from Rob McHugh. It was always going to be too much for Perú, who managed just 119/7 in their 20 overs.

That gave the cafeteros confidence heading into the next duel with favourites Argentina, who had travelled to Santiago with a young, fit and talented team of mainly home-grown players. Argentine openers Gonzalo Husain and Bernardo Irigoyen had their team off to a flyer, before Colombia tightened up in the final overs to set themselves a challenging but reachable target of 157 to win.

Despite Laas and McHugh both getting into the 30s, the run rate proved a step just too far. Although Abhas Shrivastava of Medellín CC nearly got the Colombians there with 29 off 18 balls, the final score of 136/7 was just not enough.

Colombia – true to the country they represented – were the life and soul of the tournament off the field. Plus, the squad also provided probably the moment of the weekend when an inspired bowling performance from Nick Barsby took a game that had seemed lost against Mexico to a draw. Colombia went on to take the game in a dramatic ‘super over’, something that had never before been seen at the SACs.

The defeat to Chile in the afternoon, however, made it virtually impossible for Colombia to reach the final, despite a hat-trick for Pankaj Malik of Bogotá Indians CC. This was probably reflected in the lacklustre performance with the bat against eventual runners-up Brazil on the final morning.

History was made in the ladies’ tournament, where Brazil beat the Argentina ‘Flamingos’ for the first time ever in the final to take the cup, sparking joyous scenes. Chile and Peru also sent ladies teams to the tournament, leaving plenty for the Colombian Cricket Board to aim for in the future as it looks to expand local participation in the sport. 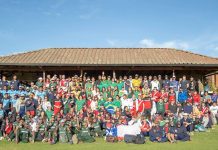 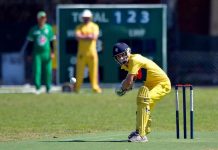 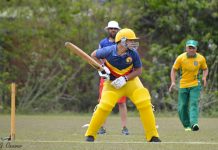