Nairo Quintana, the escarabajo from Cómbita, Boyacá, has become the most successful stage-race cyclist in Colombian history after winning the 2016 Vuelta a España, while bogotano Esteban Chaves continues his promising career, with a third place podium finish.

Nairo is the second Colombian to win the Vuelta a España after Lucho Herrera made history in 1987, two and a half years before Nairo was born. It is the second grand tour crown for the Boyacense after he won the Giro d’Italia in 2014.

The hero from Boyacá was euphoric about the victory, especially after having beaten his archrival, Chris Froome. “It felt like half of Colombia was here”, he said. “It’s spectacular. I had fought so many times to win La Vuelta and now we’ve finally done it.” For him, this win was even sweeter than the Giro in 2014, “I’ve had many victories in my career but this one is perhaps the most important because of the other riders who were in the race”.

He also referred to the current situation in Colombia and the peace agreement, “Let the world know that our country is peace, love and sports”.

Froome was full of praise for his Colombian rival, after applauding him over the finish line in the final mountain stage. “Nairo was great this Vuelta. Team Movistar was great this Vuelta”, he said. “They really rode well and deserve the victory.” Froome, Nairo and Chaves even shared a glass of champagne during the final stage.

At the start of the Vuelta a España, the 26 year-old escarabajo was one of the favourites along with Froome and Spaniard Alberto Contador. It turned into an entirely Colombian caper, with outstanding performances from Chaves, Nairo and Darwin Atapuma. The latter held the red jersey for four days and narrowly missed out on two stage victories, both times crossing the finish line in second place. Nairo Quintana held the red jersey for another 13 days before bringing it to Madrid, while Esteban Chaves’ brilliant display in the penultimate stage – see box below – put him on the podium as well.

For Nairo it was sweet revenge after the disappointment in the Tour de France. He had adjusted his whole season for his sueño amarillo, but Froome proved too strong in every aspect of the Tour and Nairo had to settle for third place. But this Vuelta a España was different – Nairo had taken some time off at home in Boyacá, while Froome continued in sixth gear, with the gruelling road race at the Olympic Games in Rio de Janeiro.

Their differing energy levels were visible during the opening week of the Vuelta, as Nairo paddled up the mountain, light as a feather, while Froome lost valuable time early on. The Brit regained his rhythm in the following stages and stayed close until Nairo and Contador went on the attack in the sixth kilometre of stage 15.

Froome was left without domestiques, isolated and in the trailing group in what would prove to be a decisive point in the race.

The 2.37 minutes Nairo gained on Froome in that stage were enough to keep him ahead, even after a brilliant time trial from the Briton. The escarabajo protected his lead in stage 20, the final mountain race, sealing his victory.

He left the question of whether he would compete again next year open, focusing instead on that elusive yellow jersey. “The Tour is a dream for me, I’d love to win it”, he said. But when pushed about a return to Spain next season he smiled, “most probably”.

Stage 20 from a local cafe

It’s a chilly and overcast morning in Bogotá. The streets are quiet, but cafes are bustling with Colombians glued to TVs for the most important stage of this Vuelta a España. While sipping coffee and hot chocolate and munching bread with scrambled eggs, they watch the whole drama of the penultimate and decisive stage of the Vuelta unfold.

Darwin Atapuma is minutes ahead, fighting for the stage victory. The thrill passes like a current between the supporters. Five minutes down the road is Chaves, who had made a surprise attack on the penultimate climb of the stage and managed to get away. After a bit of towing from his teammate Howson, he’s all on his own. We witness the personal time trial between him and Alberto Contador, all the way up to the top. Contador is third in the general classification and Chaves needs to gain a 72 second advantage to get on the podium. The time difference looks great as he has a two minute buffer but his trademark smile is long gone and Chavito starts to visibly suffer as he slogs towards the finish line.

Behind them, Froome mercilessly showers attacks on Quintana. However, Nairo has found a safe shelter in his British rival’s shadow. The viewers in my cafe start to panic for a second before the camera changes its angle and you can see both of them again.

Back to Atapuma, he’s been caught by his French competitor, Pierre Latour. He makes several attacks in vain, but now we’re at the final sprint. The buzz of excitement in my cafe has become a choir of “vamos, vamos”, reeled off at machine gun speed. But to no avail. Atapuma finally gives in, bows his head down and watches Latour reach for glory.

No time to dwell on that, as Chaves is starting to lose time, his advantage shrinking unrelentingly. Quintana on the other hand looks as cool as cucumber on Froome’s wheel after the latter’s fifth vicious acceleration.

Chaves passes the finish line, the counting starts. Nairo attacks on the final 50 metres just to stamp his superiority. The attack is greeted by what looks like a genuine if not unusual applause from Froome.

50.. 60.. 70 seconds, Contador appears on the final straight but it’s all too late, he misses the third place spot by a mere 13 seconds! Two Colombians on the podium, and an incredible climax for what is already considered as one of the most memorable editions of the Spanish race. 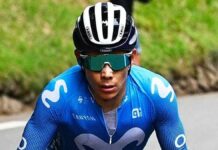