The Spanish language voiceover artist for such iconic figures as Frodo Baggins and Arnold from Hey Arnold, Enzo Fortuny, speaks to Oli Pritchard

There was so much going on at SOFA that it was hard to believe there was yet more hidden behind the scenes. Yet that was what Oli Pritchard found, as he had the rare luck to be able to speak to Enzo Fortuny, voiceover artist for such iconic figures as Frodo Baggins and Arnold from Hey Arnold, not to mention a slew of anime such as InuYasha.

Enzo is a friendly figure, easily putting one at ease as he draws up a seat. It’s been a long day, but he’s happy and willing to talk at length. “My favourite character? Well, there are many, but InuYasha, Drake, Arnold. They’re my favourites for their personalities…and also for the amount of love that the fans have [for them].”

He continues, “Naturally, we voiceover artists are anonymous, although we become known on some social networks. Thanks to the fans, the otakus of InuYasha, I have received a lot of love.”

“Drake too, it’s so much fun.” He leans forward and there’s an almost electric charge of excitement, as though he’s imparting a hidden wisdom, “[Drake and Josh] is a very well written series. It’s an excellent comedy, and when I dub it I have a lot of fun.”

He explains that certain characters allow more freedom to play, “I recently dubbed a mouse for Discovery, one of their kids’ shows. That was a lot of fun, because in English he was really funny-sounding, so I did it exactly the same way for the Spanish version. You see, with caricatures you can really play around a lot more.”

Voiceover actors have a lot to deal with. Part of it is being expected to use a tremendous range of different voices. “The most difficult voices are any characters that shout a lot, or are very effusive, like InuYasha. Also, there are parts of Drake where he speaks very quickly, and we have to dub it all because Mexican dubbing has a very good reputation at a continental level. Part of that reputation is because, in general, it’s very well synchronised.”

Enzo goes on to talk about Frodo Baggins from Lord of the Rings. He sits bolt upright as he affects the mannerisms of the little hobbit and it becomes clear that he is an actor, not just a voice. That voice, however, is exemplary as he launches into character, shivering and shaking. “Frodo is a character that’s always like this, ‘ah, um, uh, Sam…Gandalf…uuuh.’ You might say that’s easy, that they’re just noises, but it’s not easy at all because you have to stay true to the original and look at the lips.” He gives a number of sighs, coughs and laughs to illustrate their differences. It’s becoming clear that his stellar reputation is well deserved and that this work is much more complicated than I had thought.

Watching the video is important, then, to check that the lips match the words. Enzo points out that in video game dubbing this is much easier, as they can use ProTools to simply change the lip movement. But when it’s video, he’s required to multitask. “I have the script, of course, and the video too. Matching the two isn’t always easy.” He mimes looking at the two and it’s immediately obvious that this requires a fair amount of concentration. “You see? I’m reading, watching, synchronising and acting, all at once! It’s very complex.”

Added to this is a need to watch the original. The idea is not to copy, but to pick up some elements from the original actor. “I’ve watched Elijah Wood many times”, says Fortuny, slipping seamlessly into the voice, “and I know very well how he talks, how his voice is and how it matches his face. We were born in the same year, although he’s more serious than me, so I need to drop my tone.” Here he shifts his pitch dramatically upwards, “not like the tones I use with Drake for example.”

“If you have a good director,” recounts Enzo, “they will explain the film, your character and their role in the film, and normally, the end of the film. But not always.” We fall about laughing as he tells us how surprising it can be to watch films he’s dubbed. “For example, I was dubbing a new film, Kiss of The Damned, I think it’s called, about vampires. At the start I didn’t understand the film well at all. Of course, for roles like this you need”, and he drops his voice, “a voice very low and slow. I didn’t really understand the film at all, and in the end the ending was very different to what I had imagined.”

It sounds like there isn’t much freedom at times, and Enzo is quick to clarify, “It depends on the client. There are some that are very orthodox, the script is the script and that’s the end. But the majority are not like that, they accept changes. Logically, you have to stay in the context, you can’t invent new stories. But we can adapt certain things. For example, English is much more clipped than Spanish. So we might lose a few words in order to be able to synchronise the dialogue.” This explanation has been given in his Arnold voice, by the way.

Of course, Enzo does not only work with English originals. I’m intrigued to know whether the process is different for him in different languages. “Well, I know English, more or less, so I can adapt things easier. From Japanese, that’s impossible, because I don’t know any Japanese! Also, anime is sometimes very badly animated. The mouths are often open for very long periods, like 3 seconds of a single scream. Sometimes, and I admit this is a sin, we change the voice slightly to avoid that being a problem.”

He finds German difficult, but assures us that “Portuguese is much easier, as it’s much closer to Spanish. We understand various words.” 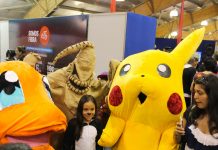