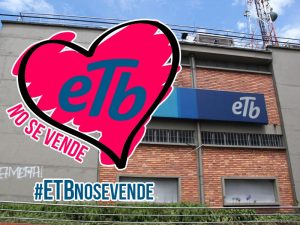 ETB sale gets the green light, amid mounting privatisation fears

The council owns close to three billion shares in ETB, which is around 87% of the company. Based on current stock market prices, the majority stake is worth an estimated COP$1.87 trillion.

After a reported 15 hours of debate, the motion was passed by a majority of 31 votes to 12, with proposals in relation to the future of the firm set to be discussed during a plenary scheduled for June.

ETB’s ‘AAA’ credit rating granted by consultancy firm Fitch Ratings was recently downgraded but it is still seen as a “very stable and low risk” firm, El Espectador reports. The company expects its earnings to rise some 14.3% during the next four years, while Fitch Ratings has a more conservative 4% estimate.

The sale has been met with a series of citywide protests, with town councillor Hollman Morris leading resistance to Peñalosa’s plans over fears that the needs of the public sector will be overlooked. Under the hashtag #BogotaDiceNoVentaETB, Morris has headed a very public media campaign against the mayor.

Furthermore, Bogotá’s comptroller said that the decisions made about the future of ETB must be supported by solid technical and social criteria, such as a study into the “actual valuation and objective of the company” and “the impact for the city and public patrimony of Bogotá”. According to their report, these studies have not yet been carried out.

Despite objections, the sale is expected to take place during the second quarter of 2017. A press release from Peñalosa’s office outlined a series of projects that the earnings would be used for, including a proposed 30 schools, four hospitals, improved infrastructure links and marked investment in citywide security.

Pros for the sale: