Which women can you confidently say you have in your back pocket? In only three cases is this literally true (figuratively is another matter). The women chosen to be on the Colombian banknotes may not be household names in the same way as Gabo and Silva, but this doesn’t make their rise to fame in a historically male-dominated country any less impressive.

Despite the fact that living in Colombia we probably see these women’s faces at least once a day, most people would be pushed to name them, let alone their claim to fame.

Many will be familiar with the face of the old 10,000 peso note. Policarpa Salavarietta, affectionately known as La Pola, was a seamstress and spy for the Revolutionary Forces. When she moved back to Bogotá in 1817, it had become a stronghold for the Spanish Royalists. This made getting into the city particularly difficult. With the help of some forged documents and under the guise of working as a servant, she entered the city and made her home the nerve centre of the resistance. Using her skills as a seamstress, she could successfully infiltrate the homes of the royalists, collecting vital information and eavesdropping on officials’ conversations, all while fixing a hole in someone’s jacket. During this time she was also able to pass unnoticed through the streets of Bogotá. Nobody at the time expected a female seamstress to be capable of this level of complex planning and audacity, because of course they didn’t.

Eventually though, she was captured. Along with her brother and six other insurgents, she was sentenced to death by firing squad. She spent her last night cursing the Spanish and predicting their downfall. After a whole night of this, she was dehydrated and was offered a glass of wine by a prison guard. Not willing to be defeated by her captors or by cottonmouth, she threw the glass back at them, shouting “I would not even accept a glass of water from my enemies!”

Alongside her lover, in Bolivar Square, La Pola finally met her fate. Her last words, to the other prisoners facing their doom, were befitting of the boldness that had been her defining trait – “I have more than enough courage to suffer this death and a thousand more. Do not forget my example”. She then turned around to look at her executors in the face as they began shooting, because in case you hadn’t realised already, this woman was a complete badass.

It’s tough to follow an act like La Pola, and it takes a woman like Virginia Gutiérrez to do it. The face of the new 10,000 peso note rose to fame by exposing the plight of single mothers in Colombia, the significance of the woman as the figurehead of the Colombian family, and how women could fight against the societal expectations that had been enforced by decades of religious colonialism.

Guitiérrez dedicated her life to the study of women’s place in Colombian society. In her research, she noted the ways that the different regions of Colombia perceived the value of women in monetary terms. When travelling to the La Guajira region in the north of the country, she met with a Wayuu woman who asked her how many goats her husband paid for her hand in marriage. She answered none, to which the indigenous woman seemed dismayed. “Poor thing,” she said. “You’re worth nothing!”

The experience gave Guitiérrez the realisation that gender roles, even between geographically close regions, social strata, and generations, could be drastically different. As she states in her most important work, “Family and Culture in Colombia”:

“Single mothers from everywhere in Colombia … women abandoned by their man or who mourn his death … Mothers who conceive, gestate and stop in slums … All the mothers who earn bread, who multiply it in their mouths of your hungry children … for you, my work and my faith without limits “

Through her tireless efforts and research, Virginia Guitiérrez worked towards a future where no woman again would ever be traded for goats, even if they were really nice ones.

In keeping with La Pola and Virginia Guitiérrez, the face of the new 2,000 peso bill – Débora Arango – was no stranger to controversy. A painter from Medellín, Arango explored the ever changing perception of the female body in Colombian society. Instead of sticking to the traditional style, and having rejected the socially acceptable and popular Cubism movement, she turned her talented hand to grittier subjects.

When, in 1913, 3,000 banana plantation workers went on strike and were subsequently massacred by the Colombian government, Arango used this to comment on the policies of the Colombian government during La Violencia – the resulting painting was named “Tren de Muerte” or  “Train of Death”, and remains one of her most famous and powerful works. She focused on women who had been ousted from conservative society. The subjects of her work were not members of the elite, but prostitutes and prisoners. These were labelled as obscene by the Catholic Church and led to her work being shunned throughout much of her professional life.

Débora Arango died in 2005 at the age of 98, a few years after her body became too weak for her to continue painting.

The academics, artists and revolutionaries depicted on the banknotes are not only significant figures in Colombia’s history. They also stand as role models and inspirations to women – both within the country and outside of it. 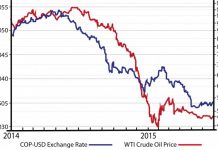 Peso falls off a cliff – and just keeps falling