Even by Saturday’s eclectic standards, Juan Pablo Merino, better known by his stage name Pavlo, cuts an arresting figure. He’s a fabulous pop star in the making with a sound and style that should be on a much, much bigger stage. And for a pop star in Bogotá right now, that means following the titanic Miley Cyrus performance on Monday. “Of course, yeah,” he says “I was here in Bogotá for the concert and I was, OMG, so happy. I was shaking, those powerful vocals, the visuals, everything. I want to be like her.”

It’s a big ask, but he’s having a go. “I’m going with dancers, with visuals, I want to do the best that I can. The clothes that I use are not going to be regular weekend clothes, you know? They’ll be more special, like Lady Gaga, imponente!” His style is a large part of his stage personality, and he wants to stand out: “With me on the stage, it’s like ‘who is this guy, he’s different,’ that’s what I want to do.”

Unlike some of the more classically indie bands playing Festival Estéreo Picnic 2022, he’s unashamedly pop. “I’m a pop star, and I’m trying to do something new here with my music. I don’t think there are many artists like me that make this type of music here in Colombia. I’m trying to do something different. When you finish a song and see the reaction, I love it. It’s addictive. We’re constantly changing as people, and that happens in music too.”

Reactions have certainly come, as Festival Estéreo Picnic 2022 came to call, despite his tender years. “I’m really excited. I didn’t see it coming this fast, but I’m so ready to do my best and make everybody dance.” He thinks that the capital is more than ready for him: “When I was in Bogotá a few years ago, I was walking in Chapinero and people stopped me in the street to get a photo and I was ‘OMG, of course,’ that’s who I am. That doesn’t happen in Medellín but in Bogotá, so I’m really happy to be here.”

He’s no stranger to the festival, and is excited to share a stage with Gwent legend MARINA. “I was always there as a fan and thinking ‘I’m going to be there on the stage someday,’ and now I’m the artist that’s opening the stage that has Marina on it. I want to be her, I need to meet her!” I wonder if he’d like to follow Miley and play the Movistar in the future. “That would be crazy, but I would love it. Who knows? I want to be as big as possible, that’s what I always say.”

Read everything about Festival Estéreo Picnic

He comes across as enthusiastic and confident, never arrogant. He explains a little about how it was different when he was younger. “I was so shy, I didn’t like who I was. It took hard work to feel this confidence and think ‘OK, this is what I want to do’. He says he’s a different person on stage: “Pavlo with the ‘V’, he’s so different from me, Juan Pablo. One is so shy, the other one wants to be the centre of attention.”

He divides the two sides of his personality clearly, as he still thinks of himself as that shy kid. “It was a long time to get to this point, putting on makeup and feeling comfortable on stage. But I’m so happy with it. I like small groups of people, but Pavlo, the performer, he wants to be seen, he wants to be heard. He likes to be in the spotlight.” As well he should be, as one of the most flamboyant artists of the weekend.

You can find Pavlo at 2:45pm on Saturday, opening the Adidas stage. 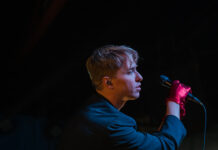