Woody Allen is an exceptional filmmaker, who has 40 films under his belt over the past 50 years. It won’t come as a surprise to most readers that during that time, Allen has become a master storyteller. His films engage audiences, largely thanks to his witty dialogue and the well-structured characters that deliver it.

Once again, the director gathers a marvellous cast and together they ignite that essential spark commonly found in Woody Allen stories.  Led by young talents Timothée Chalamet and Elle Fanning, A Rainy Day in New York takes us through the adventures and misadventures of this deeply-in-love couple during in a weekend in New York City.

Chalamet plays Gatsby, a scion of a wealthy NYC family. He wants to detach from the lifestyle that comes with said social status. Gatsby, unlike his brother, has no foreseeable goal in life, he doesn’t have a plan, he just goes with it.

Fanning plays Ashleigh, a wannabe reporter who works for the college paper and sees an opportunity to start making a name for herself professionally in her next task, interviewing independent filmmaker Roland Pollard (played by Liev Schreiber). Chalamet and Fanning are joined by other talented and well-known faces such as Jude Law, Selena Gomez, Diego Luna and Rebecca Hall.

As mentioned earlier, Allen is an experienced director who effortlessly uses everyday events to create compelling narratives. Common tropes found in Allen’s films are also present in this latest work: love affairs, searching for the meaning of life, an artist expressing his world view and family dynamics.

We cannot forget the other main character in this movie, New York City itself, beautifully photographed by the Italian master Vittorio Storaro. The city, as well as the weather, play a key role in the development of the story. We are placed in different NYC landmarks such as Central Park or the Met, but the movie also provides us a look at some of the most exclusive places like the Carlyle Hotel or the duplex apartment of important movie stars. The characters mix in with these locations, and seem to inherently belong, as this connection between character and location fills the world of this movie with life. It makes it more real and palpable.

Even after 50 years, Woody Allen is still able to create a real connection between his films and the audience. We can identify with the characters and with the many things that happen to them. This is one of the reasons why Allen remains relevant, even after the recent controversies. He understands people, what they go through, what they dream of, why they suffer – universal concerns that, even as the years go by, remain the same.

A Rainy Day in New York, while not Allen’s finest movie, is populated with a top-notch cast that uses a solid script to keep us engaged, laugh and, most importantly, makes us recall the many missteps and successes we have had in our own love lives. 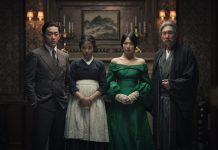