Nairo Quintana holds the red leader jersey after an exciting first week of the Vuelta á España, but with our riders within 20 seconds, nothing is decided. Ten other Colombians started the Vuelta in Torrevieja this year with several different goals, how did they do?

Nairo Quintana took the red leader jersey in today’s grueling mountain stage in Andorra. Though he’d already won stage two in great style, the Boyacense’s Vuelta has not been without its ups and downs. He mentioned early in the race that Alejandro Valverde is the Movistar team leader for this Grand Tour, and with the Spaniard sitting within shooting distance, the team leadership battle has not yet been decided in the Colombian’s favour.

The race, which looks different than usual due to its climb-heavy opening week and uncharacteristically flat final week, seems to come down to four candidates. Apart from Valverde, time trial specialist Primoz Roglic from Team Jumbo-Visma seems the biggest rival entering next Tuesday’s time-trial. But Miguel Ángel ‘Superman’ López can’t be ruled out yet either.

Superman started the Vuelta á España flying, with his Team Astana one of the strongest outfits in the third Grand Tour of the season. After losing the red leader jersey during the contested second stage, López was able to win it back on two separate occasions. In the mountain stage in Andorra, he looked poised to take the jersey back again but remains behind Nairo and Roglic in the general classification due partly to a crash on the final mountain.

For Rigoberto Urán the Vuelta finished with a nasty crash in stage six. Though the EF Education First rider was sitting comfortably in the top 10, a wet patch on the road led to a crash that caused him to go to the hospital with damage to his lung as well as collarbone and shoulder blade fractures.

In the first week of his Grand Tour debut, Sergio Higuita showed that he will be a force to be reckoned with in the future. The 22-year-old helped Rigo get the red jersey for EF Education First, but with his team captain now injured, he will look to improve on his current 13th place standing.

Higuita currently stands one place ahead of Esteban Chaves, who looked good in the earlier mountain stages but lost time in today’s stage; an early mechanical problem left ‘Chavito’ on his own behind the peloton for the better part of the day.

Daniel Martínez also came to the Vuelta as Rigo’s domestique in the mountains, but just like Higuita, the 23-year-old rider lost his main goal and we will probably see him in breakaways.

Fernando Gaviria came to Spain for stage wins in the sprint, but because of a crash in the team time trial on the first day, he hasn’t been at his best in the mass sprints and only managed to grind out a third position so far. If he can recover well, there will be more chances in weeks two and three to go for stage wins in mass sprints, adding to his six Grand Tour stage victories so far.

For Sebastián Molano, it is his first Grand Tour as well. He has looked to help Gaviria in the sprint, but hasn’t been able to do so thus far due to Gaviria’s crash. He took 10th place in stage four but was relegated by the jury for an irregular sprint, making it a Vuelta to forget so far.

Sergio Luis Henao, also in Gaviria’s Team Emirates, has shown himself in the breakaway on several occasions. In stage seven he won the combatant rider award as one of the instigators, and was the last one to be pulled back by the peloton.

Darwin Atapuma races for Team Cofidis, who came to the Vuelta for stage wins on the breakaway. The team got his stage and was even in the red jersey for a day. Atapuma, for his part, has done well by being in several breakaways in the first week.

Sebastián Henao, Sergio Luis’s cousin, is part of the very young Team Ineos. Tour de France winner Egan Bernal skipped the Vuelta and none of the other GC candidates are in the Ineos line-up for the Vuelta. Henao had the opportunity to show himself and in stage seven he was in the breakaway. He was ahead in a group with his cousin, but dropped back from the front early on.

The second week will start with the individual time trial and conclude with some uphill finishes at the weekend to shake up the general classification again.

Vuelta a España: Miguel Ángel López back in red jersey after stage 7 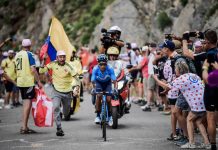 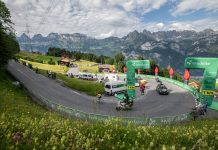