Home Entertainment Get on your FICCI

Cartagena’s International Film Festival, FICCI, celebrates its 57th edition from March 1-6. As the Caribbean city prepares itself to welcome film lovers from around the world, Jazid Contreras gives an overview of the main events and films to watch out for.

The official poster of this year’s edition of the Festival Internacional de Cine de Cartagena de Indias, the most important in Colombia and oldest of its kind on the continent and branded FICCI 57, exhibits a striking image of the India Catalina statue covered in bijao leaves creating a lush texture that will almost make you feel like you are in the heat of the Caribbean. “This time we want to appeal to all the senses and also put the human body at the centre stage,” said Diana Bustamante, creative director of the festival. 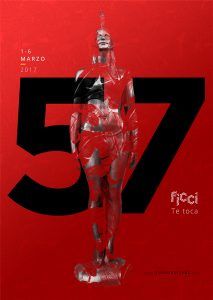 The India Catalina is not only a city icon, it’s also the inspiration for the statuette awarded to the best films at the festival each year. This year’s official competition has six categories: fiction (10 films), documentaries (10 films), Colombian (8 films), shorts (23 films), new creators (16 films) and gems (12 films).

For over half a century the FICCI has been a beacon of the film industry in Colombia and Latin America, especially in the Caribbean region. Bustamante points out that, for example, the creation of the Havana Film Festival was partly inspired by Cartagena’s.

Among the titles in this year’s official selection is the Haitian drama Ayiti mon amour, directed by Guetty Felin, about the intertwined lives of three people in the aftermath of Haiti’s 2010 earthquake.

The gems section, a selection of recent and noteworthy movies from all over the world, includes the acclaimed film Aquarius, by Brazilian director Kleber Mendonça Filho, starring Sonia Braga as Clara, a woman in her sixties who refuses to sell her home and instead decides to fight against a powerful real estate developer who wants to tear down the building she lives in.

Also in the competition is Amazon, a documentary about an English woman who lost her eldest daughter in the horrific landslide that wiped out the entire town of Armero (Tolima) in 1985. She decided to leave everything behind and live in the middle of the Colombian jungle. The film was directed by Clare Weiskopf who is the protagonist’s daughter.

Plus there’s the world premiere of Colombian filmmaker Ruben Mendoza’s highly anticipated film Señorita María: la falda de la montaña. In 2014, his movie Tierra en la lengua earned him an India Catalina award for best feature film in the fiction category and another one for best director in the Colombian category.

The opening ceremony will be held on Wednesday, March 1 with a special screening of El silencio de los fusiles, a documentary film that focuses on the Colombian peace process. President Juan Manuel Santos is expected to attend, as he has in recent years.

The FICCI is also known for bringing some of the brightest stars in the world of cinema to Colombia. Susan Sarandon, Darren Aronofsky and Alejandro González Iñárritu, just to name a few, have attended as special guests in recent years. This time around, the festival announced the presence of Thai director Apichatpong Weerasethakul and British filmmaker Andrea Arnold. “It makes us very happy to pay tribute to a female director,” added Bustamante.

Also on the list of illustrious visitors are French actors Denis Lavant and Vincent Cassel, who will participate in various events, including a master class session. And of course, French cinema will be a major part of this edition with a special section dedicated to Film Noir, as part of the Año Colombia-Francia 2017.

Aside from the main film competition, the festival features a number of other events such as Cine en los barrios, which brings movies to the most impoverished areas of Cartagena. Puerto FICCI, the academic section of the festival, aims to help develop the Colombian film industry. Part of this will feature a film review workshop with Argentine critic Diego Lerer and ten university students who were chosen in an online application programme.

Let’s not forget about the India Catalina awards for the audiovisual industry which this year rebrands itself to include not only the best of Colombian television, but also creators that publish their work on digital platforms like YouTube.