A global initiative to create awareness about water shortages through dance returns to Bogota. Oli Pritchard takes a walk with the organiser to learn about the city’s waterways and how Global Water Dance hopes to help

Bogota is a city bathed in water. It rains at least weekly, often daily, yet there is no major waterway for the city. Most of the city is rather blasé about water use too – even the famous campaign of yesteryear by Mockus failed to get people really on board over the issue of wasting water.

It’s a serious global issue, that most international analysts predict will lead to major unrest worldwide. But screw the future – lack of clean drinking water is a problem that too much of the world already has to deal with and should be fixed. It is a carbuncle on the face of humanity that we allow these situations to persist.

Although the cliché is to think of Sub-Saharan African nations, one doesn’t have to look far from Bogota to see issues: take Guajira, which has been struggling with drought for a while, or Yopal, which has never had running water, despite being a state capital. Worse still, parts of Choco are without drinking water, despite it being the rainiest region on earth. Yet some people do care, and they’ve brought an international initiative, the Global Water Dance, to Bogota.

Toto Serrath, one of the organisers, agreed to take time out from walking his dog in order to explain to us what the Global Water Dance is all about. “Well, it was born in the USA in 2008, when the artistic director Marylee decided to use the medium of contemporary dance to bring awareness to the shocking statistics about drinking water.”

Becoming more animated, he continues, “The statistics are terrible, almost a billion people have no access to clean water. The advantage of something like dance, like art, is that you can show people the reality of these statistics, bring them away from paper.”

Although Toto is a strong supporter of the initiative, he’s quick to hand credit for the Bogota project over to Peruvian Vannia Ibarguen. He explains, “She studied with Marylee in the States, then returned to Lima, where she started their part of the movement. After that she arrived in Bogota with enough energy to start us up”.

It sounds like an interesting project, but one wonders how it will apply to a city like Bogota –  almost uniquely grey and concrete-y, with few large green spaces under public control and a water system more poisoned than Snow White eating an apple pie.

Yet Toto is clear on their objectives: “We have two main aims: first, to change paradigms. Think about the language we use… we call these canales, not ríos.  When you call them canales, you think about humans, that we have built them. This means that people throw rubbish into them, treat them badly, stop looking after them.”

He continues, “When we call them ríos, we understand better that they are natural, that they should be respected and treated like natural things. You have to remember that they are real rivers, older than the city that surrounds them.”

“The second aim that we have,” he explains, “is to unite artists together. This is about changing not just what we call the rivers, but further, how we think about water. Art is all about changing perceptions and changing society, so it’s a natural alliance of art and social conscience”. After all, he adds, “What is art if it doesn’t have the power to help change?”

All interesting stuff so far, and he’s clearly passionate about the topic. So, what can we expect in Bogota on June 20, when the Global Water Dance arrives in town?  Toto explains that the day will be broken up into three main parts, and three main dances. Each event focuses on a different river in Bogota and this year is the turn of the Arzobispo, which runs down through the Parque Nacional, past Parkway and eventually out to Salitre. The principal event will centre on the Septima, outside Ecopetrol at the top of Calle 40a, where there will be all sorts of stalls and promotions, as well as the vast majority of the dancing. The other two zones are looser, the first being where the river meets the NQS.

Toto laments, “It’s so sad and crazy that the river is channelled underground at that point, simply because we think that a road is so much more important. So, what we’re going to do is a paint a mural there, to remind people that the river doesn’t actually stop, even if you can’t see it. It’s good to remember some of the nature that was here before us.”

The final part embodies that idea of building a change in society: there will be a march up the hill from the Septima through the Parque Nacional. More than simply a fun ramble, the participants will be picking up litter and cleaning the river as they go.
“This waste collection will really help people to get into the idea of caring for our waterways, that they can do something positive to help society”, enthuses Toto. The three parts will eventually come together at the main centre on Septima, where the dancing will take place.

This will also be split into three parts, following a clear progression. First, a chance to watch the Danza Ritual, which is the same across the world and promises to be a spectacular show featuring top dancers interpreting a fascinating and serious subject. After the professionals comes the music of Pedro Crump, a local jazzman with serious Afro-Colombian influences. This is the part most Colombians should like the best, because it is when the dancing will kick off! After that, there will be an array of local bands and colleges exhibiting their moves, amongst these will be a danza por la paz.

Throughout the event there will be plenty of stalls and stands giving information about the problems faced worldwide by people without access to clean water, as well as a heavy emphasis on pressing local issues such as Guajira, Choco and Yopal, all of which have severe problems with fresh water that sometimes the people in the mountainous capital don’t fully acknowledge.

This sets Toto off again on the wider issue of how we treat water. “It’s a real problem, even here in Bogota where we have such huge natural water resources. You might be surprised to learn that we have 37 rivers and nearly 200 streams. Almost no one knows where they are, and that’s sad”. 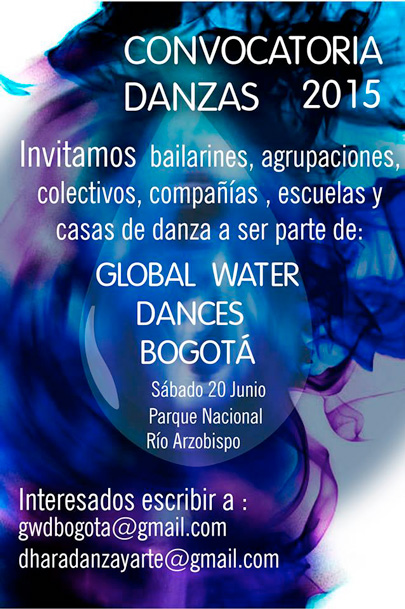 He enthuses, “Obviously, this isn’t Medellin, where there’s a really obvious central river, but still, it’s ridiculous that children in Bogota just think that water comes from the tap and no more”. He pins the blame squarely on the administration, explaining “some indigenous groups say that the rivers are mirrors to their societies. If that’s the case, do we like what we see? I don’t think so. But no one seems to care. The administration cares a little about the infrastructure, but they are completely absent when it comes to care and maintenance, so we end up with black water everywhere.”

He continues: “That water is not black when it comes down from the mountain, so the mayor’s office should sort it out. Petro has good ideas, but they have not been properly implemented… and I think the next mayor will care less”.

A pessimistic end to the interview maybe, but think about it this way – turn up on June 20 and you can help Toto and his friends make a difference. Be part of the solution, not the problem.

Global Water Dance Bogota is taking place on Saturday June 20, starting at Parque Nacional, Calle 40a with Carrera 7, at 8am and continuing throughout the day.