Colombia has plenty of national celebrations, but also finds the time to celebrate other cultures’ special days, such as St Patrick’s next week. Find out more and tune in to Facebook at 9pm to continue the discussion Live!

Colombia has plenty of home-grown festivals to enjoy, but the Colombian appetite for parties is so big that we import festivals too! St Patrick’s Day is upon us, so we’ll be talking about that tonight at 9pm on our weekly Facebook Live with Brendan Corrigan of Wrong Way fame.

If there’s a celebration you remember from back home, or that you celebrated while living abroad, there’s a good chance you’ll find a place to mark the occasion here in Bogotá. The capital becomes more and more cosmopolitan by the month and even if flights are a pain, you can travel the world (ish) in the city.

Of course, with an Irish host, we’ll be talking about Ireland’s connection with Colombia tonight at 9pm on Facebook. Brendan’s got a lot to say about St Patrick’s Day. That’s usually a lot of fun in Bogotá, as many places that like a tipple or two. Bastille Day for the French features good food and usually some cycling, as Colombians love the Tour. Talking of bikes, there’s usually a bike ride for Kingsday in the Netherlands.

The big daddy of Euro-fests is surely Oktoberfest, though, which sees special brews from various brewers in and around the capital. Happily, it’s celebrated in October, too, which removes the irritation from the name. The English, thankfully, don’t celebrate our national day and there are small events by groups of Scots and Welsh for Burns Night and St David’s as well as the odd other UK festival.

The Americans have it easiest – there’s the Super Bowl in early February which seems to get bigger and bigger here every year. Then you have the Fourth of July mid-year which sees fireworks and the like, before Thanksgiving provides a little respite from the cold November rain. Wey, ya, plenty will celebrate Cinco de Mayo, of course, and that’ll be good eating. Canada Day is probably celebrated and Australia Day is gaining popularity in pockets of Bogotá even as it becomes controversial in the antipodes.

From Asia, the Chinese New Year usually sees Lion Dancers around the country, as well as traditional drummers. Indian food and yoga will be celebrated for Holi and possibly Divali as well as International Yoga Day in June. If it’s cherry blossom season or Golden Week that excites you, see if the Japanese community is up to anything.

Then, of course, there’s a lot of international festivals, such as Halloween and Valentine’s. Both of those catch a little criticism from traditionalists while the rest of the country takes the opportunity for more celebration. Halloween is particularly massive, as Colombians love witchcraft and magic. Many spend a lot of time and money preparing costumes and again, there are usually some themed beers. Love and romance is rarely not expressed in Colombia (see our special from a few weeks back). Women’s Day has exploded in recent years too, including this week.
So tune in tonight at 9PM to our live show, or check it out (or past episodes) on our YouTube channel. We’d love to hear your suggestions for festival ideas, days we’ve missed or stories from past events. 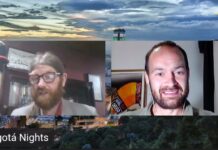