Home In This Edition Hidroituango or: The greatest project nobody wants to take responsibility for

Since April of 2018 the emergency around the Hidroituango project has kept national and local authorities on alert. The possibility of the project collapsing is something that has worried a lot of people including residents, project financiers, and energy regulators. Politicians who championed and publicly defended the project from the start have been inconspicuously silent following the most recent crisis. Even if the project does not fail, people should be held to account for the mistakes made along the way. Sadly, they probably won’t.

Let’s begin by stating the obvious: I am not an engineer and nothing of what follows pretends to disqualify the job many engineers and emergency workers have done to remedy the ongoing situation which reached critical levels last week. Their job is fundamental for the preservation of life, the safekeeping of the environment and the sustainability of the project in the long term. I am in awe of their dedication and countless sleepless hours in the past weeks and months.

The emergency situation around the Hirdoituango dam left a lot of people worried. In the first place, the residents of low-lying areas downstream have spent the past year (and arguably since 2010) concerned about the effects the project and the danger that the dam poses on their immediate safety, their economic sustenance, and the preservation of their way of life. Secondly, the project financiers including lenders and insurance holders are concerned about the ability of the project’s main shareholders (the city of Medellín and the department of Antioquia) to be able to pay their financial liabilities resulting from project cost overages as well as penalties. Thirdly, the project represented close to 16% of Colombia’s energy output meaning that the project won’t go live by the expected 2020 and regulators and local authorities will have to figure out a way to fill the energy demand gap or impose restrictions on energy consumption.

The project was announced with pomp and circumstance. It was celebrated as an engineering and public policy feat by all involved. Its possible collapse though has been accompanied by the silence of the major proponents of the project. It is evident by now that local stakeholders made changes in the designs of the project in order to finish it on time and that these changes resulted in a series of engineering mishaps that caused the current emergency. In their desire to see the project through and their ambition to demonstrate the prowess of Antioquian engineering they forgot to incorporate lessons learned from past projects. They have caused incalculable environmental damage to the Cauca river basin, displaced local communities, endangered the finances of the region (and possibly the country). They have also brought about energy uncertainty. Although investigations into possible wrongdoing have begun, it is very unlikely powerful people will be held accountable for the damage they have caused.

Managers for Empresas Públicas de Medellín who operate the project admittedly made changes to the project designs in December 2015 and August 2017 to create an auxiliary diversion system for the Cauca River in order to avoid a two-year delay in the project.  Further Conconcreto, the construction company which was involved in the construction phase of the project, acknowledged that there was a financial incentive of COP $70bn (USD 22m)  if construction was completed by November 28, 2018, which would allow for the first power generation unit to start operations. Moreover, if the project was not completed by the August 2019 deadline, the parties would re-negotiate a construction agreement and arguably many of the cost overages would have to be covered by the contractors.

The cost overruns that may affect Hidroituango due to the effects on the project will be significant. The total project cost was estimated at COP 11.4tn (USD 3.7bn) current cost overruns due to the emergency are estimated at COP 1.5tn (USD 500m) and are likely to increase given the geological instabilities of the terrain, and the likely litigation the project will have to face. This will largely affect the finances of the Department of Antioquia and the Municipality of Medellín.

Many readers of this newspaper will probably not remember the great shutdown of 1992, which was a result of the country’s overreliance on large hydroelectric projects as well as by the El Niño phenomenon. The lesson was simple, as Armando Montenegro reminded us in a column last year in El Espectador: avoid massive projects that account for a significant energy share. Prioritize smaller projects that diversify risks, are less complex, easier to build, and have lower social and environmental impacts.

However, the builders of Hidroituango assured the country that the project was in the best of hands, that the engineering was stellar, and the fact  that it was a 100% local project was a source of pride. As it turns out, all of us will pay heavily for that pride. Experts estimate that energy demand could exceed supply* by 2020 or 2021 – depending on the weather. And that will mean that the country will have to streamline other energy projects – in particular, thermal fossil fuel projects – which are likely to have a high environmental toll. What is inevitable, experts say is that energy prices increase as a result of Hidroituango not opening, which will be damaging to the country’s competitiveness.

On the environmental front, the Cauca river is being restored to its normal levels downstream from the project area, however, the damage has already been done. The onus is now on EPM to show that fish stocks can replenish and species be returned fully to their habitat. The onus is on them to show that the damage they have done is, as they claim, reparable. Illegal mining along the Cauca River had for decades been responsible for poisoning and drying rivers in the lower Cauca region. With its new dam project, EPM looks to extend that troubled history.

The chickens come home to roost

Although we have not yet cleared the emergency it is critical for investigations to continue pursuing those responsible for hastening the project. Those investigations must determine if there was undue pressure to finish the project ahead of schedule for political reasons; if project operators ignored warning signs or calls from engineers or communities about project instability; if environmental and social concerns were brushed aside to meet project deadlines.

Public Prosecutor Fernando Carrillo on Monday announced the start of negotiations and unfortunately it will sing an all too familiar tune. Public outrage will most clearly have electoral consequences come October when local elections are scheduled to take place. Legal liability and criminal liability is another wholly different story, one which I am not very optimistic will yield results.

*Correction: An earlier version of this article said that “Experts estimate that energy supply could exceed demand by 2020 or 2021.” The opposite is true and the article has been corrected to reflect that. 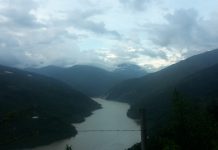