The mountains are under threat. But they’ve got friends. About hiking in and around Bogotá.

‘Piratas 8’ shouts the TV news headline. It refers to Bogotá’s habit of classifying neighbourhoods by wealth and influence with 1 being the slums and 8 presumably being filthy rich. But pirates?

Turns out these are property developers building illegal mansions in Los Cerros Orientales, the steep hills overhanging the city forming a Forest Reserve. Which, in theory means ‘protected from pirates’.

But in Bogotá, don’t count on it. It seems freebooters – swashbuckling or otherwise – from both ends of the economic spectrum are keen to grab themselves a slice of those cool green slopes overlooking the grey congestion below.

There are at least 60 barrios populares, (in case you didn’t know, ‘popular’ here means ‘poor’, not that everyone wants to go there) encroaching the hills that edges the city. Meanwhile the evening news is recounting how the maverick impresarios – las piratas – have violated the reserve by building huge marble and gold-leaf mansions in a place called Bagazal.

I look on Google maps: sure enough, it’s a cancerous construct set in a woody mountain bowl in the heart of the Cerros Orientales above Calle 79. Five large houses with ample grounds – tennis courts, solariums, outhouses and all the trapping of extreme luxury – take up as much land as the whole of Bosque Calderón, a humble barrio nearby with thousands of residents.

According to the evening news, ‘despite various court orders to demolish the illegal structures, the owners have refused and, in some cases, continued construction’.

Now the owners are being threatened with jail. Unless their powerful lawyers can wriggle them off the hook.

Poor dears. What happened to the pirate code of constructing where you build what you want then – oops! Did we forget to get planning permission? Silly us. A few bungs and wheel-oiling will fix that. We’ll get it backdated!

Part of the problem for the Bagazal pirates boils down to a powerful local neighbourhood group called Amigos de la Montaña. Its remarkably mellow leader, Andrés Plazas, seems an unlikely pirate scourge. But I detect a glint of steel when I visit him in Rosales, the -six barrio closest to Bagazal.

He also points out that poor displaced by violence have been in the spotlight for Bogotá’s land invasions, but historically there have been grabs by rich developers levering cheap land to build luxury flats. Even outwardly respectable institutions – colleges, universities, the military, the church, and district entities – have sometimes expanded into what is now forest reserve without proper approvals. But it’s the poor invasions that face bulldozers.

‘We say here in Colombia justicia es para los de la ruana: the laws apply to the poor,’ says Andrés, a former civil engineer before becoming full-time mountain protector. Bagazal has become a test case to see if the state can also reign in its super-wealthy – and influential – scions.

Demolition of Bagazal’s illegal mansions ‘could send a strong message to constructors to stay off the mountain. People would be scared to invest,’ says Andrés.

Everyone is watching now to see if the CAR (Corporación Autónoma Regional) can enforce the demolition order. Andrés is sanguine about the outcome. ‘There are powerful lawyers involved, so the decision could be delayed again,’ he says. But not forever.

The fact that Bagazal is even on the news agenda is largely thanks to Amigos de la Montaña, a people-power association that started life ten years ago as a contact list of hikers on Andrés’ computer (it was, literally, ‘amigos, de la montaña’).

Even more remarkable, considering its roots in an estrato-6 community, is that Amigos de la Montaña has reached out across the social divide to some of the poorest barrios in the city.

But from its self-interested beginning – friends hiking and having picnics on the Quebrada La Vieja trail that heads into the mountains from Rosales – Amigos has grown into a powerful lobby group quickly acquiring technical expertise on public use of environment spaces.

Strangely, this came about because hikers kept being attacked on the mountain by gangs with knives. Fed up with his buddies being tied up with their own shoelaces, Andrés made the bold move to visit the estrato-2 barrio Bosque Calderón nestled in the nearby hillside.

‘We suspected the gangs came from this barrio, so talked to leaders there. I thought they would throw me out. In fact, they were very welcoming; they also wanted to fix the problems. Next we knew community leaders from Bosque Calderón started attending Amigos de Las Montañas meeting in Rosales’.

”Access to green spaces is a human right for all”

In a stroke, Amigos did what Colombia’s sprawling capital consistently fails to do: meaningfully unite communities with common cause across massive economic extremes. Call it the magic of the mountains.

The goal is to bring people to the mountains, explains Andrés. And equally across the social strata.

‘How can we preach protecting the environment if no-one can enjoy it? We live in a massively divided city, roughly rich north and poor south, but access to green spaces is a human right for all,’ he says, adding some shocking statistics: the World Health Organisation recommends ‘an ideal average of 15 square metres of green space each city citizen’ while Bogotá achieves only 3.9, with estrato-1 barrios down to one square meter per person. Yikes.

Meanwhile the city has a 60-kilometre fringe of lush green nature which is heavily underused. And there are at least 26 main trails into the hills (and many more minor tracks). So why are they empty?

‘Political inertia,’ says Andrés. For example, access to El Delirio, a bush trail in the south of the city, is blocked by pettifogging bureaucracy: hikers have to apply ten days in advance to the Acueducto (public water board, that owns the land) and separately organise their own police escort: ‘Effectively, it’s closed,’ says Andrés.

Another trail, Pico de Aguila, which runs up the mountain from the National Park close to Calle 39, is technically open but ‘for some mysterious reason the police refuse to guard it’.

Related: Deforestation in Colombia: The forest is burning.

Police patrols on the mountain trails have become the norm because of a history of attacks on hikers, another reason to fear the hills. But if marginalised communities are involved in managing the trails, and get some economic benefit (for example, as mountain tour guides or selling lunches to hikers) then the security risks will be reduced.

Another key change has been the legalisation process of informal settlements along the edge of the forest reserve. This has allowed land tenure for residents and ushered in state s such as schools and proper water supply. This meant redrawing the Forest Reserve line higher up the mountain, but with a firmer commitment to ‘stop more land grabbing’, explains Andrés.

‘For decades people have come to Bogotá displaced by conflict and seeking refuge in the hills. But people in these just struggled to protect themselves. With of their community, residents have a new interest in their environment and protecting it.’

Part of the process requires residents to accept a ‘boundary pact’: communities agree to not steal more land, and even monitor their own frontier with the reserve.

This is what’s happened in Barrio Bosque Calderón where Amigos and other NGOs helped the community recover a beautiful trail – Quebrada Las Delicias – leading to a waterfall.

Unfortunately, Las Delicia’s success has been overshadowed by the closure in recent years of two of the most popular trails: Quebrada La Vieja and Las Moyas.

La Vieja, which runs from Rosales up through fragile native bush to the high páramo overlooking Bogotá (and, on a clear morning, the snow-capped volcanoes of the Cordillera Central), was for years the city’s premier trail. It closed in 2017 because of overuse.

”The trail was already overcrowded. Now it was critically overloaded”

This was caused partly by the city council’s decision to extend opening hours which brought in floods of hikers. Previously the entrance gate only opened from 5am to 9am, effectively limiting access. With longer hours 2,000 people were tramping the trails every Saturday.

‘The trail was already overcrowded. Now it was critically overloaded,’ says Andrés, who predicted the crisis and had opposed the longer opening times.

Two years later La Vieja is set to reopen this month. But don’t hold your breath. In the two years of wrangling between the Acueducto – who own the land and have the gate keys – and the CAR – which manages the reserve – there have been numerous news reports of ‘La Vieja reopening’. But no cigar.

When it does re-open, data set by technical assessments will limit the daily entrances to around 500, and a raft of other requirements – toilets, car parking, checkpoints and even a phone app to book your space – are being proposed.

Andrés is also relaxed about La Vieja’s reopening. Amigos has campaigned for access to the mountain, but also recognises that ‘it needs to be done properly otherwise we end up back where we started with overcrowding’.

Good public use depends on opening more trails along the mountains to reduce pressure on just one or two. Why not put police on Pico de Aguila? Why not reopen Las Moyas? Why not open more of the mountain to spread the load? It makes sense.

Related: Hiking in Bogotá, the hills are alive with the sound of walkers

Meanwhile Bogotá’s mayor is promoting his Sendero de Los Mariposas, a trail following the ridges of the Cerros Orientales. It’s a good intention, but ‘directed at tourism, for visitors to the city,’ says Andrés. ‘What we want are paths into the hills that everyone in Bogotá can enjoy. We don’t need huge investments, just some organising.’

Quebrada Las Delicias has shown that community involvement can reduce costs, such as with trail maintenance and signage cheaply with natural materials and community volunteers. The community provides guides and charges a small fee per person to enter the trail which opens 7 am to 11 am on Saturdays and Sundays (the upper part of the trail is currently closed by falling trees, but should be cleared soon, according to community contacts).

Andrés has another theory on why it seems so hard to open trails on the mountain, and it comes right back to the Bagazal pirates. The La Vieja path overlooks the illegal mansions and other dodgy construction projects on the mountain fringe.

‘Hikers learn to love nature and defend it, so are more likely to denounce illegal activities. We are the eyes on the hills. Powerful people are breaking the law with illegal construction. They don’t want witnesses. There could be vested interests to keep us out’.

So, August could turn out to be crunch time for the Cerro Orientales and Amigos de La Montaña. Will La Vieja at last reopen so nature lovers can enjoy the hills? And will the Bagazal pirate mansions be knocked down to return the land to its natural state?

Many in Bogotá hope both strands of the story have happy endings. We’ll keep you posted. 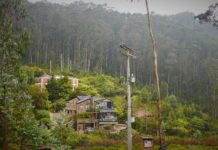 Bagazal: bring on the bulldozers

ABOUT US
The Bogotá Post was founded in 2014 with an aim to present current and interesting content which contributes to enrich the vision of our society. We are the most popular newspaper among the international community in Bogotá, our specialised and high quality content covers the city creating bridges between Colombia and international perspectives.
Contact us: [email protected].com
FOLLOW US
© The Bogotá Post. All rights reserved.