Home In This Edition Homeless crisis in Bogotá

Fiscalía to investigate alleged poisoning and disappearances of homeless while residents complain of violence, attacks and robberies after Bronx raids

Tensions continue to rise between local communities and the homeless people displaced by the Bronx raids.

There are reports of attacks by the displaced on the TransMilenio, rioting, robbery and violence – including a story involving the kidnapping of a young girl – especially in areas that are close to the Bronx.

In Veraguas (around Carrera 30 and Calle 6), a group of residents have banded together to guard their neighbourhood, armed with whistles and sticks.

Estimates vary as to the number of people who have been displaced by the Bronx intervention. The mayor’s office claims there are about 240 people, but Hollman Morris (who challenged Peñalosa in this year’s election) says it is more like 400-600 individuals.

Whatever the number, local NGOs working in the area are talking about a crisis. Juan Celis, who works for homeless charity Fundación Procrear, told Vice Colombia that his organisation was “overwhelmed”: “What happened in the Bronx was a one-off intervention. There is nothing planned for the long term.”

Further afield, city councils in other parts of the country like Cajicá, Ibagué, Pereira, Manizales and Villavicencio have reported an increase in homeless people from the capital, who they claim are being deliberately sent there.

The fiscalía will investigate this as well as accusations that people living on the streets in Bogotá are being deliberately poisoned. Carmen Torres, a section director, said that as of yet there is no material evidence, and that after an initial investigation they would decide whether or not to start a formal enquiry.

The mayor’s office strongly denies any assertion that they are sending homeless people to other regions, citing a DANE census from 2011 which said 40% of the homeless population comes from outside the city.

Related – The Bronx: After the raid

Bogotá’s ombudsperson, Carmen Teresa Castañeda Villamizar spoke out against the hostility towards the homeless.  She said in a statement, “You cannot make space for vigilante justice – it should not exist, nor can we allow threatening notices or alleged social cleansing initiatives.”

A series of press releases emphasise the work they have done to support this vulnerable group. The council has doubled the budget to COP$172 billion, provided 16,000 health appointments already this year and has prevention teams out on the streets.

Concerns about the former Bronx-dwellers have not deterred authorities from further operations. On Friday September 9, 800 police intervened in San Bernardo. They captured 12 people and confiscated 60,000 doses of drugs. El Espectador reports that the police also found 300-400 homeless people, 150 of whom were sent to temporary holding cells due to intoxication. 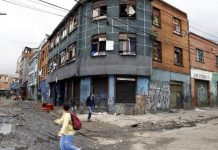 The Bronx: After the raid 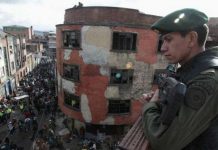