Home News Features Time for a transportation transformation: The RegioTram

Beyond Metro and TransMilenio, changes in other forms of transport are set to take place in the capital region. With RegioTram, bike lanes, and ride-sharing, residents may have many options for cleaner, more efficient transportation.

The capital’s transit expansion extends past city limits. The RegioTram, officially known as the Train for the Vicinities of Bogotá, will connect the city with municipalities to the west, including Funza, Mosquera, Madrid, and Facatativá. With a length of almost 40 km, the train will make a significant dent in travel times between Bogotá’s city centre and outer regions, home to many commuters.

According to the Bogotá Ministry of Mobility, about 10,000 passengers move between Bogotá and other municipalities per hour on intermunicipal short distance bus routes. The RegioTram, by comparison, expects to transport approximately 130,000 per day. The whole journey, which will run from downtown Bogotá to Facatativá, will last 50 minutes. Depending on the cost of the trip, which has yet to be set, the RegioTram could appeal more to commuters than buses currently do.

The entirely-electric train system is expected to be operational by 2024. The COP$3.43 trillion project is funded by the nation and the Department of Cundinamarca.

In addition to investments in mass transit systems, the city plans to grow its already extensive network of bicycle paths in a promotion of clean mobility. The new TransMilenio and metro lines will be linked to bicycle paths so that cyclists can transfer easily to a mass transit station. The city will construct 19 kilometres of bicycle paths that serve the metro and equip stations with 10,000 bicycle parking spaces. The expansion builds on previous moves to integrate cycling with mass transit. For the past decade, the Urban Development Institute, Insituto de Desarrollo Urbano (IDU), has incorporated bicycle paths into its Plan for Territorial Organization, Plan de Ordenamiento Territorial (POT). The new paths will add to 344 kilometres of bicycle routes already in use in Bogotá.

Uber, the popular ride-hailing service, returned to Colombia last week. Residents and tourists have several other options as well when it comes to ride-hailing apps. Chinese company DiDi and Greek company Beat are comparable alternatives that offer a similar service to Uber. In addition, riders can use Cabify, which allows them to order a taxi using a phone app. 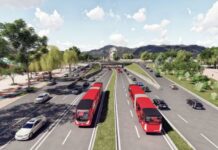