Indigenous people deserve thoughtful solutions to their problems, not to be used as pieces in a political game.

As the Colombian football team sank to defeats against Peru and Argentina this week, a game of political football has been going on between Defence Minister, Diego Molano and Mayor of Bogotá, Claudia López. Trapped in the middle of this are a thousand or so human beings. López has sought to lay responsibility for them at the door of the Defence Ministry, who in turn say it is her responsibility. After the lynching of a truck driver who fatally killed two Embera people in a collision this week, the matter has come to a head.

Since October, there’s been a large camp of indigenous people in the Parque Nacional in the centre of Bogotá. Largely families and children, the numbers have hovered around the thousand mark over the months. Originally this was a group of solely Embera people displaced from their homelands in the Chocó and Cauca by conflict and illegal logging or mining activities. Over the months, the camp has repurposed itself as a centre of indigenous culture. However, it’s still largely Embera.

There’s a definite need to get this camp out of the park, both for the people in the camp and for the park itself. Claudia López blames the Defence Ministry, whose chief, Diego Molano, points out that his institution has helped people to return. There’s truth to this: Some families have boarded trucks and gone back to their homelands. Others haven’t. López herself has made offers to the indigenous leaders with alternative habitation, but been rebuffed.

As the situation continues, there is still more heat than light coming from politicians. This week, the mayor’s cabinet chief claimed that political parties are behind the decision to reject the offers to leave. Lopez’ comments that child protection institutions have failed to protect the children living in the park have drawn retorts from the ICBF (Instituto Colombiano de Bienestar Familiar) as well as Molano. Seemingly every political actor wants to lay blame somewhere else. Meanwhile, the camp remains in squalor.

There’s no proper sanitation in the park, the only access to potable water are the taps in the toilet blocks next to sports facilities and tarpaulin tents provide limited protection against the elements. Toilet facilities are at best limited, so the Río Arzobispo is used as such, and trees are cut down for firewood, as there is neither electricity nor gas in the park. These conditions are horrific.

The indigenous leaders have good reason to distrust offers by Colombian state institutions. They have a very, very poor record of delivering on their promises. Once the camp is gone, the deal may well not be honoured. Then there’s the advantages of being located in the centre of Bogotá. Food, clothes and toys are donated frequently. Money can be earned by selling handicrafts and begging. And it’s a very visible reminder of their situation. That seems much less viable if the community is hidden away on the margins of the city.

With each passing week of inaction, the situation worsens. It’s been allowed to continue because no one wants to send in ESMAD to break up a camp of mainly children. The ICBF have made attempts to care for the children in the camp, and the alcaldia sends healthcare support regularly at least. Although these are good temporary measures, there remains a need for a definitive solution. Whether or not that will happen, is still unclear. Many temporary measures in Bogotá last for a long time, for good or for bad. 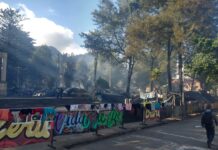