Home Colombia If the coral reefs disappear, so will 30% of the ocean’s species

With some scientists warning that the world’s coral reefs will have been destroyed by 2050, we speak to Colombian marine biologist Mauricio Molano about the conservation work he is doing.

A recent United Nations report sets out the consequences of an increase of 1.5°C in the planet’s temperature. According to the report, just half a degree – the difference between a rise of 1.5°C and 2°C – could expose million people to life-threatening heat waves, water shortages, and coastal flooding. It will also mean the world loses much of its coral reefs.

While Bogotá may feel a long way from the sea, we spoke to marine biologist Mauricio Molano about the work he is doing to preserve and study coral reefs. The bogotano expatriate is a leading expert in research aimed at preserving coral reefs. He explains that aquaculture techniques have enabled the creation of a ‘Noah’s ark of corals’ – preserving them in case the worst does happen.

Bogotá Post: Mauricio, please tell us in detail about the research you and your team conducted. 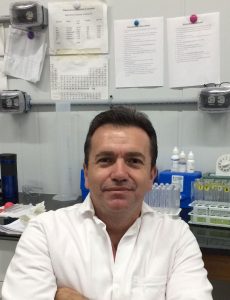 Mauricio Molano: We work on an aquaculture technique which uses fragmentation for the asexual reproduction of corals. This is a very effective reproduction technique in which we take a mother colony of corals to obtain mini-individuals that, with time and proper care, will serve to create new colonies.

Once we obtain those specimens, we fix them using a substrate, such as a coral rock. At the lab, we use special non-toxic glues – which is very important since we work with closed re-circulation systems. After the new colonies have been glued to their new homes (the substrate), both the new individuals and the mother colony are submerged in a special mud solution to avoid infections. The new individuals are then put in nursery tanks according to their lighting needs – depending on the coral species – to start their growth process.

The new corals are fed twice a day with a special mix of frozen plankton and vitamins. The minerals corals need (calcium, magnesium, and carbonates) are added to the water through automatic dosing pumps. We measure the concentration of these minerals on a daily basis and make the necessary adjustments. The lack of these minerals may stress the corals or cause their death.

BP: What have you achieved with these techniques so far?

MM: We have developed an Aquanov health index. With this index we can accurately assess the corals’ health and take corresponding measures to improve it. We also conduct scientific testing with different degrees of light to enhance growth and enable the best corals to thrive. At the same time, we have developed a chemical product that controls the algae growth in coral systems. Your readers might not know this, but algae are a big problem both in the ocean and in coral closed systems: if they grow too much, they will cover the corals and end up killing them. In the ocean, this algae growth is caused by contamination brought by waters that are loaded with nutrients such as discharge water or agricultural by-products.

BP: Can you tell us why this research you are conducting is so important? Particularly, what is its impact on the environment, what is its long-term effect?

MM: It is very important. The strategic, environmental, fishing, and genetic value coral reefs have is invaluable. Coral reefs are highly-specialised systems which are extremely sensitive to any change in the environment, such as global warming. One in three oceanic species depend on them; that means, if coral reefs disappear, so do 30% of the species in the sea. Some authors have said that between 40% and 50% of coral reefs in the world are being heavily affected. Other authors have a more a fatalistic forecast, stating that if the current trends of global warming and contamination continue, there will not be any coral reefs left by 2050. This may or may not happen; but given the importance these ecosystems have, we need to be prepared.To me, the predictions could change if our behaviour improves.

With the aquaculture techniques that we developed with the company Aquanov, we are capable of producing new coral colonies to be used to repopulate natural coral reefs. That will avoid the need to extract corals from their natural medium, a practice that is big in  many Asians and South American countries. We will also be able to produce the corals used in the pharmaceutical industry in the future.

In the hypothetical case of an extreme increase in the temperature of the planet due to global warming, we have the technologies developed through aquaculture to create a ‘Noah’s ark of corals’, and thus preserve the greatest possible quantity of corals in entirely artificial systems.

BP: We have an important readership of young people. Could you please tell them why the work of marine biologists is so important for the planet in general and against climate change in particular?

MM: We [marine biologists] are romantics and we are passionate about oceans of course. But it is a reality that planet Earth – definitely accurately named a bio-sphere – is a totally interdependent living being. Whatever happens in the ocean is going to affect us all. Oceans cover three quarters of our planet; our task is to study oceans to know what resources are available and to know when we need to stop exploiting them. We study their ecology, and we assess the sea frequently to help governments and the world prevent, and face situations such as global warming, and suggest preventive measures.

BP: Could you share with them a bit more about your research or something curious about it?

MM: Our cooling systems failed in the summer of 2015, and for two weeks our coral tanks suffered an increase in temperature from 27°C to 30°C. We experienced live ‘global warming’ in our tanks in the lab. We saw how our corals blanched out and started to die; we lost almost 50% of our corals, and we learned how serious global warming can be.

Mauricio Molano is currently exchanging information with other Colombian and American scientists who are involved in coral reefs recovery initiatives so that their re population programmes are optimised and new species culture techniques are standardised so the asexual reproduction of corals is perfected.