Just hours after Colombia’s historic victory over Uruguay in the football World Cup, their compatriots continued to rewrite sporting history, occupying the whole podium in the Houston Shell and Pennzoil Grand Prix in the Verizon Indycar Series.  The Colombian glory run continued the following week when they took first and third places in the Pocono Indycar 500 in Philadelphia.

In the Houston Grand Prix, 23 year-old rookie Carlos Huertas, who has had a sloppy season so far, nonetheless took the first place ahead of Juan Pablo Montoya and next rookie in line Carlos Muñoz, all born in the country’s capital.
Ironically, it was a race with bad weather conditions – not unheard of in Colombia and especially Bogota – that had the scoop of having the first ever Colombian one-two-three.

Huertas, competing for Dale Coyne racing, reached an average 19th place in qualifying. However, during the 80 lap race in Texas, the rookie slowly moved up in the ranking. Seven laps before the chequered flag was shown, he took the lead for the first time this season, over-taking teammate Justin Wilson who had to enter the pit lane, and held on to it until he crossed the finish line. A well prepared pit stop strategy as well as dealing remarkably well with the wet conditions brought him his first career win.

In the press conference after the race, he stated: “Obviously football is huge in Colombia. I was there last week for all the matches, and the country just stops. My win is just a little bit compared to that. I hope the people back home are happy.” He went on to add with an emotionless face, “This win means a lot to me, you might not see how happy I am, but believe me, I am!”.

A few days after the race, Huertas and his team were punished with a $5,000 USD fine each for having an illegally large fuel tank and rear wing infringement. This explained why the new champion was able to finish with a race high 39 laps without going into the pit lane, but the final race results weren’t affected by the sanction.

Second place Juan Pablo Montoya, from team Penske, reached his highest finish since his surprise return at the start of this season. The 38 year-old Bogotano had a decent race in which he profited greatly from the bad weather conditions, coming only a tenth of a second behind his compatriot.  Montoya clearly came in a good mood to the press conference where he was joking around with the interviewers, but admitted: “Finishing second sucks. I am happy finishing so close and I know I can do it, but in the end coming second just sucks.” Talking about how it feels to be on the podium with compatriots who used to idolise him, he responded with sarcasm,“They should respect me by letting me win” , before adding in a more serious tone: “If I don’t do a good job, I deserve to be beaten, but I feel I am getting better and better.” Montoya was true to his word as he went on to take victory in the following Philadelphia race.

The number three, Carlos Muñoz from Andretti autosport–HVM racing, has been the most consistent Colombian in the series with five top five finishes in the thirteen races he competed in in the Verizon IndyCar series. Referring to the World Cup he stated with a twinkle in his eyes: “I think we are lucky to be here now, because in Colombia it is really crazy”, to add with clear pride: “It is a historic day for Colombia, we have demonstrated what we are- not only the prejudice we all know but we have shown what we are really made of and that we have a lot of good sportsmen in all sorts of sports.”

With Sebastian Saavedra as the fourth Colombian in contention, the quartet will go for more victories and Colombian podia starting with the upcoming Iowa corn Indy 300 in Newton, Iowa on July 12. 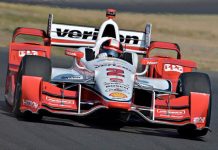 One chequered flag too far 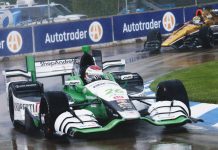 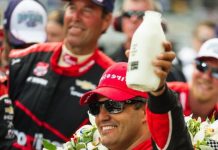