The Colegio del Cuerpo is not really a dance school, it’s a school for the body, which does so much more than just training people to be dancers.

The Cartagena-based colegio – which is coming to perform in Bogota this month – has both a social and an artistic mission. Essentially, the school uses dance as a way to empower and teach young people from disadvantaged backgrounds, a valuable mission in what is the poorest department in Colombia. In spite of Cartagena’s tourist appeal, human rights activists say about 40 percent of the city lives in poverty.

Over the past 18 years, the colegio has worked with over 8,000 young people. While some go on to pursue careers in professional dance, either as dancers or teachers, the colegio’s main focus is on teaching each of them what it calls “body intelligence” – a respect for their bodies – and giving them a safe space to explore different opportunities.

In the words of world famous dancer and choreographer, and school director Álvaro Restrepo, “The children are not just training to be dancers, they are training to use the language of dance.”

The social aspect of the school goes hand in hand with a drive for artistic excellence. And excellent it is – not only are Restrepo and co-founder Marie-France Delieuvin highly respected in their field, but the troupe has gained international recognition, performing throughout the world. One notable performance took place in Sadler’s Wells, London, where they danced alongside young musicians from South Africa’s Soweto, which plays host to a similar project. There is a playfulness to Restrepo as we conduct the interview that I imagine comes through in his teaching and his choreography. He toys with the words ‘historic’ and ‘hysteric’ as he describes the school’s move from the centre of Cartagena. His energy is catching as he enthuses about the meaning and synonyms of the word ‘body’.

For Restrepo, part of the reason he wanted to create this extraordinary institution was because he hated the dance school where he studied. He explains, “I decided to create a place where children could discover the pleasure of discipline – pursuing what you love, what you enjoy.”

But more than that, it is about healing. He sees dance as a way to communicate this message, saying “Little by little, we discovered a valuable tool to convey other values.” He stresses the importance of this type of social project in a country which has treated the body with such violence. Restrepo is very conscious of the role that dance – and art – should play in society, especially Colombian society. “Another dimension that is very important is the interaction with the political situation and the struggle for peace.”

He adds, “It is important that we as artists contribute to changing the mentality.” One project which perfectly illustrates the group’s commitment to this goal was a ceremony that Restrepo created for the Colegio del Cuerpo in collaboration with Delieuvin in 2010. Called INXILE The Trail of Tears, it commemorated the bicentenary of Colombia’s independence and was a tribute to the displaced population and to victims of the conflict.

First performed at El Campin, the show brought 300 people onto the stage, with 150 conflict victims, 50 actors and dancers and 100 musicians from the Bogota Philharmonic Orchestra all jostling for space.

The powerful performance touched the audience so much that it was re-staged in Medellin in 2013 for the National Day of Memory and Solidarity with Victims, where President Santos joined the march bare- footed alongside conflict victims.

Restrepo is passionate about the importance of the body – both as an individual and also as a social body. He believes that by healing and sculpting an individual body, we can help shape society.

On June 25 and 26, the company of the Colegio del Cuerpo will be performing at the Teatro Jorge Eliécer Gaitán. The show is called Las 7 Visiones del Amén & El Cuarteto para el Fin del Tiempo/Cuerpo. The performance, which is dedicated to the French composer Olivier Messiaen, is described as: “A liberating dance, which expresses in a corporal way a coming together of the human and the divine.”

Ten dancers from the colegio will join six dancers from Bogota for the performance. Restrepo is delighted as the Bogota dancers are part of a dance programme he created 20 years ago, and the show will create a bridge that brings together two education programmes from the same origin.

The colegio dancers, who Restrepo describes as the ‘core nucleus’, are a group from mixed backgrounds, both literally– six are from Cartagena, two from Cali, one from the USA and one from Venezuela – and artistically – some from ballet, some folk and some contemporary dance.

Fresh from the International Ballet Festival in Cali, we can look forward to a performance that will be good for both body and soul. 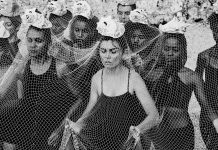 sacrifiXio, or the Transmutation of Grief

Emma Newbery - November 3, 2021
From November 16 anyone over 16 will need to show they’ve been vaccinated to get into bars, clubs, sports venues, and cinemas.

Andrea Lucia Peters - December 7, 2019
If you don’t know your Noche de las velitas from your Nochebuena, now’s the time to get to grips with Colombian festivities.