Home Colombia In context: Jorge Eliécer Gaitán and the significance of April 9

Tens of thousands take to the streets of Bogota and other cities to show solidarity with conflict victims and support the peace process, while artists and historians work on building a ‘culture of peace’

On April 9, 1948, Bogota went up in flames shortly after the murder of populist presidential candidate Jorge Eliécer Gaitán, unleashing a fury of rioting that would become known as the Bogotazo. On a sunny day 67 years later, the streets were filled with tens of thousands of people marching for peace.

President Juan Manuel Santos and Bogota Mayor Gustavo Petro kicked off the day’s ceremonies by lighting a torch called ‘The Call for Peace’ outside the Centro de Memoria, Paz y Reconciliacion building, before the march began.

President Santos said: “Today we are commemorating the victims of this senseless war in which we have been engaged for 50 years or more, and finally are seeing the possibility of peace”.

For his part, Mayor Petro addressed the crowds, saying that peace wasn’t simply about peace accords with the guerrillas. “The significance of setting off from the Centro Memoria was that that’s where the bones from the Bogotazo were interred in the mass tombs.”

He continued: “Peace isn’t just signing an agreement in Havana. Peace in Colombia signifies an end to segregation and elitism, it signifies social justice for all.”

But peace has to be fought for. The weapon of choice of the city government’s was the ‘World Summit of Arts and Culture for Peace’ (Cumbre Mundial de Arte y Cultura para la Paz) which included the Marcha Por La Paz and the Partido Por La Paz.

In the six-day event, beginning on April 6, some 300 Colombian and foreign artists, writers, journalists, and historians took part in forums, discussions, and music and dance performances across the city.

Theirs was perhaps as difficult a task as that of the FARC and government negotiators in Havana: how best to integrate the idea of peace in a culture and a people ravaged by the horrors of war for so long.

According to renowned historian and philosopher Diana Uribe, “to imagine a country in peace instead of endless, senseless violence isn’t easy, but it’s necessary if peace is to be achieved.”

“[The peace march] is a movement about dreaming of a new country. The notion of living in peace is hard for us to imagine. Imagining a new country is very important in order to reach it,” she told The Bogota Post along the parade route.

Though the day focused on the dream of peace and respect for conflict victims, April 9 will forever be a sobering reminder of the country’s blood-soaked past. It’s the day that in 1948 the presidential candidate Jorge Gaitán was gunned down as he left his office in downtown Bogota to go for lunch.

“[Gaitán’s] candidacy signified the inclusion of many more people in the political arena, not just traditional elites. And when he died, the dream [of inclusion] died for a long time,” Diana Uribe said of his murder, adding: “It’s up to us to keep the dream alive.”

The atmosphere was as much that of a carnival as that of remembrance. Brightly dressed street performers and drummers set the cadence of some 30,000 hopeful Colombians who are cautiously optimistic for a brighter future.

Following the swarms of people along the march route were a couple of dozen or so people who carried what looked like a pile of bones on a stretcher with the Colombian flag, guarded by a squad of peasants and old women with photos of their dead or missing children.

The scene was street theatre, of course, put on by high school students from Bogota’s Kennedy district. It brought home the idea that Colombia’s too-many conflict victims are not just the dead and disappeared, but also the shattered loved ones they left in their wake.

The sea of white t-shirts and white flags was dotted with many a fluttering red flag, joined by the rainbow colours of the LGBT community, as well as banners and signs from a large contingent of victims’ rights groups, NGOs and a number of indigenous organisations. Colombia’s more mainstream centre-left political parties, including the Progressives, Polo Democratico, Partido Verde, and the Union Patriotica were all out in full force.

Jesus Loñero Chucho, an indigenous man clad in feathered headdress who lives in an impoverished municipality in Arauca, said he came to Bogota to highlight the government’s indifference to his people’s plight.

“We’re here in Bogota because we are invisible in our homes, we have very little there, insufficient housing, no running water,” he said of the 30 or so indigenous people he marched with last week.

“I am here today primarily to remember the victims of the conflict,” Mockus told The Bogota Post as he marched with a group of supporters.

“This is a very important step, there is a need for atonement, a need for empathy. You see everyone is peaceful and calm here today,” he added.

When the marchers finally reached their destination inside Parque Simón Bolívar, a huge free concert was waiting for them. It featured many acts, including Panamanian singer Ruben Blades, who took to the stage dressed all in black – not as a tribute to Johnny Cash – but to remember all those who have died in Colombia’s internal conflict. 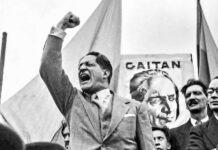 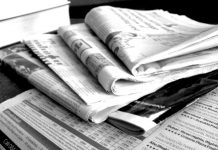