The term reciclador literally translates to a recycler and can be broadly defined as a person who recovers reusable and recyclable materials from what others have discarded as waste.

While this might sound like an obvious description of the word, the term has a stronger meaning in Colombia, as it represents the livelihood of over 30,000 citizens, unionized in 319 organizations, from 27 departments. A role made even more important given that 78% of Colombian households do not recycle, and it is estimated that, in the next four years, 321 landfills in the country will reach their useful life.

Before the pandemic, recicladores faced a variety of challenges in their daily lives. Hard labor, sifting through human waste, and verbal abuse are not uncommon aspects of this role. Now, COVID-19 has presented even more challenges to Antioquia’s (the department that is home to Colombia’s second-largest city, Medellín) 2,337 estimated litter pickers.

According to Leonardo Gomez the administrative director of Recimed, a Medellin based recyclers union that aims to protect the dignity of the city’s recicladores, “The temporary closure of the commercial sector and changes in the behavior of consumption and generation of waste from households” has negatively affected the workers at the recycling center.

With fewer people on the streets and fewer companies in business, finding material to recycle becomes more difficult, and the recycling center has seen a decrease in the amount of material sold, claims Gomez.

This is good news for the country’s landfills as waste saw a 15% percent reduction at the start of the quarantines, which began on March 20, 2020, with reductions as high as 25% in Bogotá. Colombia has since eased restrictions across the country.

It is not good news however for recicladores, because according to José Luis Acero, Deputy Minister of Water and Basic Sanitation of the Ministry of Housing, City and Territory, as they now have access to less waste to recycle. He told weekly Semana, “As there is less activity, less is bought, so fewer bags and plastics are used.”

In addition to less available waste to reuse, recicladores also face a high risk for contracting COVID-19. According to El Tiempo, recicladores often have to handle used gloves and masks when sifting through trash.

Furthermore, the use of gloves and masks to protect themselves from the virus while working is a measure only unionized workers receive. According to Radio Nacional, “The recyclers who are organized, unionized, can count on support with biosafety equipment, but those who prefer independence have to pay for them alone.” This can put independent recicladores in the difficult position of choosing between food and personal protective equipment.

“Additionally, recycling as part of the public cleaning service has been included in a large part of the regulations issued by the national and local governments, which has guaranteed the possibility of operating continuously and implementing the corresponding biosecurity protocols,” states Gomez

However, there is a silver lining for Recimed recicladores during these difficult times. Gomez claims that, “Solidarity has allowed us to ‘survive’ in these circumstances with more than 2,800 food aid packages that we have been able to deliver to a total of 450 reciladores with the support of companies and some allied public entities.”

Unlike independent recicladores, members of Recimed enjoy the benefits of receiving protective equipment that has enabled them to keep contagion rates low within the organization. Gomez states that “support and guidance has allowed us to maintain a relatively low contagion rate with just 20 confirmed cases in a population of approximately 1,500 people who participate directly and indirectly in our programs and projects.”

Even before the pandemic, support for recicladores from the government and local communities has been a key, and at times missing, ingredient to ensure a brighter future for these essential workers. If the pandemic has shown us anything, it’s that more support is needed to guarantee the safety of these workers.

For recicladores, the very nature of their livelihood and what they can earn has always been unstable. But now, changes to consumption habits due to COVID 19 are affecting recicladores’ livelihoods, making their earning potential more unstable than before. While many unionized recicladores receive equipment to protect themselves, independent workers still face the threat of being exposed to COVID-19 or face going hungry.

But these are just a handful of challenges the recicladores now face, alongside ever-present issues such as verbal abuse from society, negative stereotypes, and handling unsanitized wasted, to name a few. To learn more about this, please watch this video documentary on recyclers made before the pandemic. 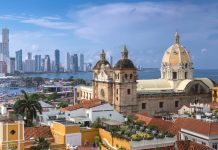 Small businesses lead the way to environmental sustainability in Cartagena