Home Charlotte Mackenzie ‘Malnutrition is wiping out our children’

Two Wayúu children have died from malnutrition in La Guajira in under a week, as the region continues to suffer from drought

A ten-year-old boy and an 11-month-old baby passed away last week after receiving hospital treatment in Barranquilla. Both were reported to have had serious illnesses, exacerbated by malnutrition.

A third death has been recorded of a one-month-old baby, though the exact cause is as yet unknown.

The recent deaths have drawn the media’s attention to the ongoing plight of the country’s 270,000 Wayúu people living in northern Guajira, who have been badly hit by years of drought and lack of access to food and medical services.

Indigenous leader Javier Rojas took his case to the Inter-American Commission of Human Rights (CIDH) last year, telling them that over 4,770 children had died in the region over the past eight years due to lack of food and water.

Speaking to Blu Radio this month, he said: “This year began very badly. We have already reported two deaths, we understand that at least five children have died within the region this year […] the situation in La Guajira hasn’t changed, as we have been reporting for over four years now. The problem is that malnutrition is wiping out our children.”

The CIDH have asked the Colombian government to guarantee “the availability, accessibility and quality of health services, with a focus that is both integral and culturally adequate to treat infant malnutrition”.

The Colombian Institute for Family Welfare carried out a study of people’s needs in over 1,500 communities in the region, including 15,000 children. The study, released in early February, identifies 900 children who are currently suffering acute or severe malnutrition.

The government claim that the number of deaths from malnutrition in children under five fell from 48 in 2014 to 38 in 2015, and insist that fighting malnutrition is a priority.

They have set up an emergency water telephone help line for those in need of immediate attention, and said in a press release that they have built 427 water tanks and have 22 tankers in operation. The release commits to having an additional 20 tankers in operation by the middle of February. 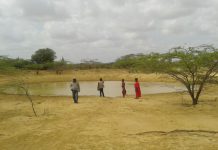