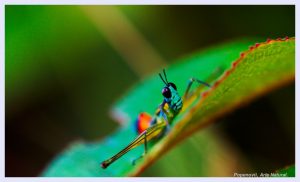 Many species are discovered every year in this mega-diverse country, and scientists are resorting to more recognisable names when classifying them.

There’s always an element of luck involved in finding a new species when encountering it in the world. This is then followed by the arduous fieldwork to collect specimens, followed by long months of diligent lab work and collaboration with colleagues worldwide in describing the new species. Passing the stringent peer-review process for publication adds to the overall amount of work involved.

For a biologist, naming a species is the cherry on top in the quest to find new species.

There are few restrictions to the names a scientist can choose; choosing a Latinized name is no longer mandatory. “A zoologist should not propose a name that, when spoken, suggests a bizarre, comical, or otherwise objectionable meaning,” insists the International Commission on Zoological Nomenclature, thus leaving a lot of wiggle room.

While most scientists use descriptive, serious names for new species, often use new species’ names to honor other biologists, as well as their family members. Many others break the mould worldwide, happy to seize the opportunity to make others smile, to make a statement, and even to get revenge.

Here are the stories behind some of the odd names biologists have chosen for species in Colombia.

A frog with a bawdy name

While exploring the amphibian fauna of the foothills around La Dorada, in the Caldas department, Colombian herpetologist Andrés Acosta found a little frog related to poison dart frogs. Initially, the enigmatic combination of unusual features of the then-unidentified species, belonging to the genus Allobates, confused him and his colleagues.

Albeit an expert identifying amphibians of Colombia, when prompted what species the frog belonged to, Acosta only managed to reply: “No fucking idea” (In Spanish, “ni puta idea”). The honest exclamation was chosen as the name for the new species Allobates niputidea, in celebration of the many unknown species and facts that continue to bewilder biologists.

A paramo plant with Caribbean feeling

If you have been to the Carnaval de Barranquilla, you have certainly danced to the famous folklore song La Puya Loca, which could be loosely translated as “The Crazy Prickle”. The song inspired the name that Santiago Madriñán, a botanist at the Universidad de los Andes in Bogotá, gave to a new species from the pineapple family found in 2015 in the Chingaza National Park.

Once he determined the plant belonged to the Puya genus, Madriñán’s decision was restricted to last name. His genius led him to name it Puya loca as a reference to the eccentric attitude of the new species’ deep purple flower. However, the plant is odd in many ways: growing in the cold paramos at altitudes of over 3500 meters above sea level, it grows a tightly packed bouquet of flowers--that can measure about 3 meters wide—atop a thin stalk.

Entomologists Eduardo Shimbori and Scott Shaw found a new species of wasp in the forests of Ecuador. While the species is not technically Colombian, it is named after Shakira: an interesting fact on its own, but the why is even more so—and honestly, a bit creepy.

These particular wasps are parasitic: they lay their eggs on caterpillars, so the larvae can enjoy a feast from the very moment they hatch. The caterpillar becomes mummified as the wasps feed and form cocoons to develop into fully formed adults.

Now, the caterpillar remains alive for a while as the baby wasps eat it from the inside, bending and squirming as it becomes desiccated and dies. These wiggly movements made the scientists think of Shakira, and thus the species Aleiodes shakirae immortalized the Colombian singer in the annals of zoology.

A coral for a football prowess

Marine biologist Santiago Herrera named a tree-like coral that thrives at depths of 1000 meters or more after football star James Rodríguez, leader of the Colombian national team and goal-scorer for Real Madrid.

When asked about his justification for naming this coral Paragorgia jamesi, Herrera simply said “For me, James is one of the most outstanding Colombians in recent years,” reported El Tiempo.

Among Colombian biologists, the same areas people were afraid to go during the heyday of the armed groups in the 1990s were refuges for biodiversity, especially in heavily developed areas in the Andes where most Colombians live.

John Lynch, a herpetologist working at the National University of Colombia in Bogotá, gave the name Atelopus farci to a tiny toad he described from the cloud forests of Albán. About a two-hour drive east from Bogotá, Albán was one of the strongholds of armed groups like FARC since the 1950s civil war, a period now bluntly known as “La violencia.”

With his choice of name for the new species, Lynch made clear what many biologists realized. While originally from Iowa, Lynch made Colombia his home decades ago and is no stranger to the sociopolitical turmoil the country has gone through. He even was questioned and kidnapped in different occasions by both the ELN and the FARC during field work in remote areas around the turn of the millennium.

After 2012, the Colombian government began a nationwide offensive and started forcing the FARC to retreat from places like Albán. Lynch was able to go back there to check on Atelopus farci. He was unable to find a single specimen, noting that water quality in the area was greatly compromised from upriver runoff from pig farms. The little toad is currently considered critically endangered—although it is likely already extinct.

In gratitude to Colombian women, music and friendship

John Lynch is a prolific scientist, describing dozens of species in South America. While most of his findings get names related to the place where they were found or in honor of other scientists, some are a bit cheekier and say a lot about the individual. Here are three such names, from a single genus, Pristimantis (which happens to contain the most number of species in Colombia).

Pristimantis viejas as a homage to the strong role of women in science. Despite literal meaning of “old ladies”, the specific epithet “viejas” is used in all of Colombia to refer to women—in a similar fashion to English words such as “broads” or “gals.”

Another of his findings ended up with the name Pristimantis carrangerorum. This one came about from Lynch’s passion for carranga music, a strings-driven musical style featuring humorous lyrics and themes relating to the life of farmers and other people in rural Colombia. This musical genre is mostly rooted around Boyacá, the department where this species was found.

Jorge Velosa, one of the most recognized carranga artists, is a friend of Lynch. The appreciation and involvement of the American biologist with the Colombian music genre led him to name another related frog species after his friend: Pristimantis jorgevelosai.

Biologists are a fun bunch worldwide. That’s why we have beetles called Agra vation, Colon rectum and Ytu Brutus. The moth genus La has made possible great names such as La cucaracha, La cerveza and La paloma. While a geeky scientist named a trilobite Han solo, a punk-loving one named two more Sid viciousi and Johnny rotteni.

Politics are no exception: Obama has at least nine species named in his honor, including the spider Aptostichus barackobamai. Three species of beetles in the same genus were named after conservative politicians from the US: Agathidium bushi, Agathidium cheneyi and Agathidium rumsfeldi.

We have a genus of sea snails called Bittium and another one of even-smaller snails called Ittibittium. There is also a clam aptly named Abra cadabra and a wasp called Aha ha; a genus named Ninjemys (meaning “ninja turtle”) and a fly species Pieza kake.

It would be a mistake to assume this is a new trend, or another sign of our decadent times. Even the father of modern taxonomy, Linnaeus, fell into temptation: he named the genus Sigesbeckia—a series of foul-smelling, insignificant weeds that grow in the mud, including St. Paul’s wort—after Johann Siegesbeck, one of his fiercest academic rivals.