Home Peace Process After the ‘No’ vote: fallout from the plebiscite

They say that a week is a long time in politics, and that is certainly true of the past seven days in Colombia. From the minute the nation voted ‘No’ and rejected the peace agreement, the government have been scrambling to keep the peace process alive.

Many FARC soldiers wait in limbo, having begun the process of moving into the demilitarised zones. And the government have begun dialogues with representatives from the ‘No’ campaign to try to find a way forward, while negotiators in Havana announce they are ready to listen and discuss adjustments.

We’ll keep this page updated as the news continues to unfold.

Immediately after the vote, Timochenko committed to continuing to work with words not weapons. He criticized those who sow hatred and said, “Peace will triumph.”

Santos addressed the nation, calling for unity and stability. He said that he would not give up and committed to a dialogue with the ‘No’ to help move forward.

Senator Uribe made a televised statement some hours later, accompanied by close advisers. He thanked the fellow ‘No’ campaigners and said, “We ask that there is no violence, that the FARC are protected and that they cease all their crimes, including narco trafficking and extortion.”

The ‘What next’ and ‘How did this happen’ discussions begin in earnest. Commentators highlighted the low turnout, and showed that many of the regions worst affected by the violence voting ‘Yes’. Some pointed out that had peace continued with a small majority, it would have been a fragile one, while others looked at the diverse reasons people had for voting no – from castrochavismo and tax fears to gender ideology or fears of impunity and political participation for the FARC.

Related – What next? Post-plebiscite questions and possibilities

The predominant mood is that of uncertainty. Could the agreement still be implemented? Would it be possible to re-negotiate? What about the much-discussed constituent assembly?

Timochenko releases a video arguing that the agreement already has legal weight under international law, and stresses that the FARC will stick to the bilateral ceasefire.

Santos refuses to accept the resignation of chief negotiator, Humberto de la Calle, instead appointing him, Foreign Minister, María Ángela Holguín and Minister of Defence, Luis Carlos Villegas to begin a dialogue with the ‘No’.

Uribe speaks from congress, having missed the meeting in the Presidential Palace. He rejects tri-party negotiations. He proposes amnesty to guerrillas that have not been convicted and juridical relief – ie a different justice process – for soldiers and police. The Madres of Soacha, a group of women still looking for over 5,000 children who disappeared during the false positives scandal, believe this would allow the those involved to get away with their crimes.

Timochenko tweets, “What will happen after October 31, will the war continue?”

Gina Parody resigns. The former education minister who had been caught up in the row over gender ideology was appointed to jointly lead the ‘Yes’ campaign. She tendered her resignation following the vote.

Uribe and Santos meet for first time in about five years. Little is known about the details of the two hour meeting, with Uribe afterwards stressing the need for changes to ensure that the deal is right for all Colombians and Santos stating that a number of areas had been identified.

Santos announces the beginning of a ‘National Dialogue’, a framework to listen to the concerns of all sides.

Tens of thousands people take to the streets throughout the country in support of peace. In Bogotá, thousands filled the streets, marching to the Plaza Bolivar, wearing white or carrying white flags and holding candles.

The silent march emulated that led by Jorge Eliécer Gaitán in February 1948, when the populist leader called for an end to violence.

One participant told us, “It was very moving, especially with all the candles.” She explained, “I felt like it was the only thing I could do after recent events. It was great to see so many people there, of all walks of life, not just students.”

The FARC tweeted, “How beautiful to see millions of Colombians defending their desire for peace.”

The European Union announces that the €585 million post conflict fund that had been earmarked for Colombia will be put on hold. The suspension of FARC from the terrorist list has not been affected.

Juan Carlos Vélez, leader of the ‘No’ campaign, stunned the public in an interview with La Republica where he explained their strategy and funding levels. He said their campaign focused on fueling “indignation”, targeting middle and upper stratos with messages of impunity and tax reform, and lower stratos with messages about the subsidies the FARC would receive.

The Attorney General opens an investigation into complaints that the ‘No’ camp manipulated voters and Vélez later resigns from the Centro Democrático, apologising for his “imprecise” words.

The two ‘commissions’ representing the ‘Yes’ and the ‘No’ camp meet to begin to discuss what should happen next.

Senator Benedetti proposes a second plebiscite because of the number of people prevented from voting by Hurricane Matthew.

Everything stops for Colombia-Paraguay match. 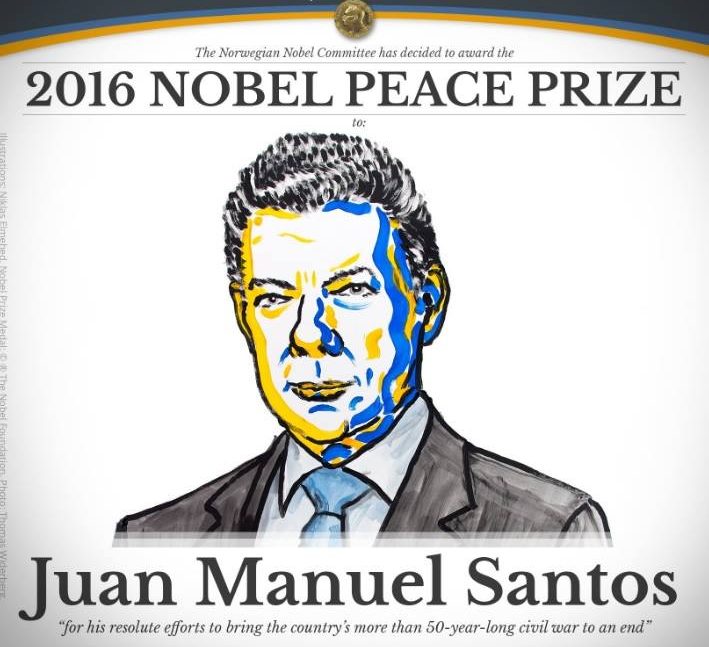 Santos is awarded the 2016 Nobel Peace Prize for his “resolute efforts to bring the country’s more than 50-year-long civil war to an end.” They say the award should also be seen as a tribute to the Colombian people who have not given up on peace, and stress that the result of the plebiscite “does not necessarily mean that the peace process is dead.”

The Norwegian committee have a survey on their website asking visitors if they think the award will help the peace process in Colombia.

The first joint communique from Havana since the plebiscite is also optimistic.

They restate their belief that that agreement reached contains the necessary reforms for a stable and lasting peace. However it recognises the result of the plebiscite, and says that the parties will follow constitutional court guidelines in process to listen and discuss possible adjustments and clarifications.

They reiterate the commitment of both sides to maintaining the ceasefire and request the UN Mission in Colombia to exercise its monitoring, verification and resolution role.

The communique thanks all those who have been working for peace and expresses a commitment to continuing humanitarian measures such as de-mining, illicit crop replacement and search for missing people.

In Medellín, around 20,000 people marched in support of peace. Like the marches in the rest of the country, it brought together people of all ages, wearing white and waving banners as they walked from the park of lights to the Teatro Pablo Tobon Uribe. The loudest chant was, “Antioquia is not Uribe.”

Demonstrators continue to camp out in Plaza Bolívar, saying that they will not leave until there is peace.

Álvaro Leyva, lawyer and former conservative minister who has played an active role in the negotiations, proposes a second plebiscite. He says this would be supported by the original constitutional court ruling.

Uribe makes his peace ‘proposals’ public. In a document that calls for both urgency and patience, he challenges a number of aspects of the agreement.