These are the human rights defenders who have been killed so far in 2017 as the spate of violence against social leaders persists. Emma Newbery looks into the rise of paramilitary violence and activist deaths in rural territories.

3) Edmiro León Alzate Londoño – The 53-year-old father of three was a member of MOVETE (Movement for Life and Defence of Territory) and an active campaigner, especially on water issues. He went missing on January 12 and his body was found on January 14 in Sonsón, Antioquia.

5) Hernando Murillo Armijo – It is unclear from reports as to whether Hernando Murillo Armijo was killed due to a robbery at his home gone wrong or as a result of his activism. The former president of the village community action group was shot in his home Santa Cecilia, Risaralda on Wednesday January 25 by three armed men. His son was also injured in the attack.

7) Emilsen Manyoma Mosquera and Joe Javier Rodallega – The bodies of Emilsen Manyoma Mosquera and her husband Joe Javier Rodallega were found in Buenaventura, Valle del Cauca on January 17. The couple were active members of their communities and belonged to CONPAZ, a network of community activists that work together for peace, social and environmental justice. They leave behind two children, aged six and fourteen.

9) Aldemar Parra García – Campesino leader Aldemar Parra García was killed in broad daylight on January 7 by two men on motorbikes while travelling between El Hatillo and La Loma in Cesar. He was president of the Asociación Apícola de El Hatillo, a local beekeeping association that was set up to assist displaced families. He also campaigned against the environmental damage done by mining in the area. 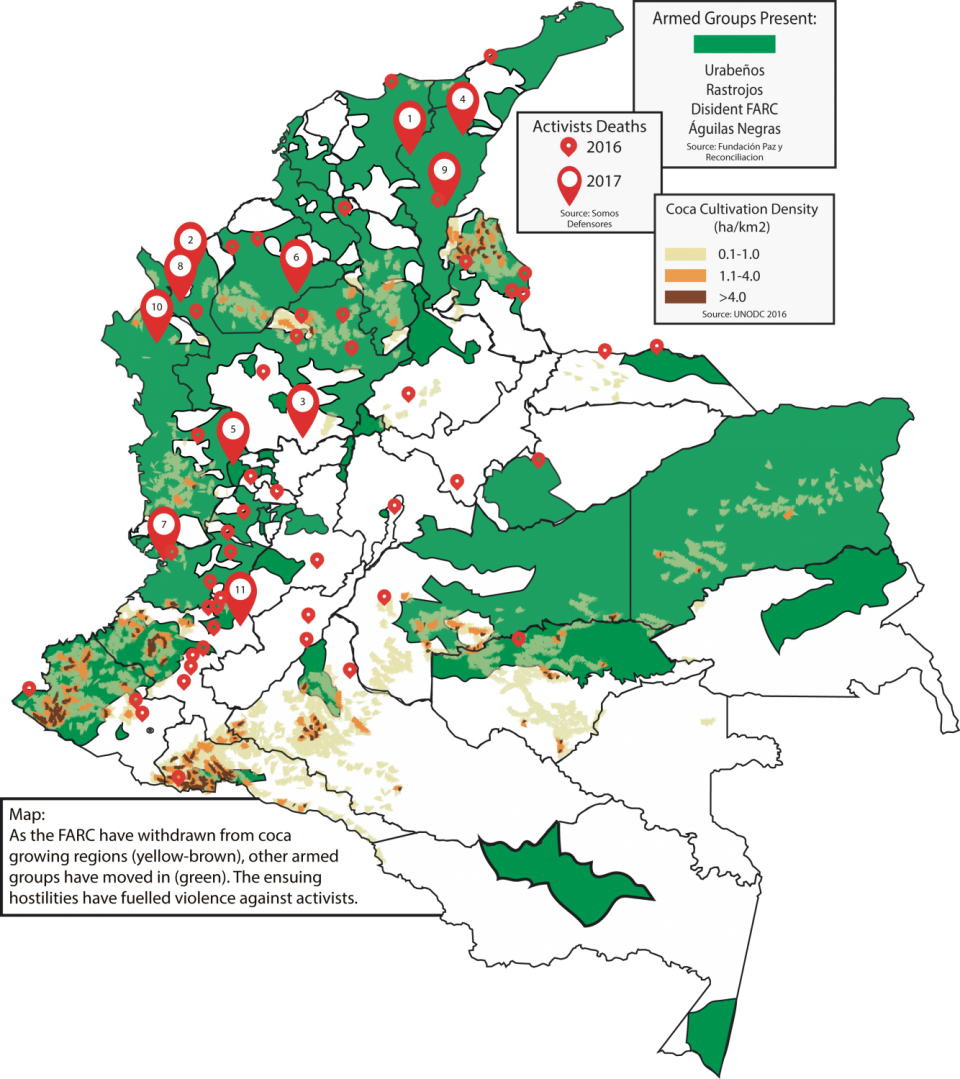 In addition to the spate of violence against human rights defenders, there are reports of a rise in paramilitary violence, attacks and threats in many communities in areas that have now been vacated by the FARC.

Armed men wearing camouflage are entering villages and telling residents that they plan to stay in the territory and that those who oppose them will be killed. In some areas, the violence – or threat of violence – has got so bad that people are having to flee their homes.

Leaflets are being distributed that call for the extermination of social groups and offer cash rewards for the ‘heads’ of community leaders, ‘communist terrorists’ and members of the leftist party Marcha Patriótica, amongst others.

Why is it happening?

There are several factors at play. The biggest is a power grab by armed gangs who are moving in and trying to control swathes of the illegal economy such as coca production and illegal mining.

For example, in the port of Tumaco, Nariño – a key strategic point for illegal gold and coca cultivation – people find themselves in the midst of a turf war. Verdad Abierta gave details of at least four criminal organisations fighting for control, ranging from a dissident FARC gang to the Urabeños. A report from the Fundación Paz y Reconciliación states that 107 families have already been displaced this year and that those that remain are suffering from a lack of access to essential goods such as food.

To complicate matters further, some ordinary citizens are taking advantage of the disorder as an opportunity to settle individual disputes.

Land control is another factor that goes hand-in-hand with establishing power. The murder of Edmiro León Alzate Londoño is a worrying sign of this fight, as he had reported receiving threats because of his activities in attempting to reclaim his land. To complicate matters further, some ordinary citizens are taking advantage of the disorder as an opportunity to settle individual disputes.

Who is responsible for the violence?

There is a worrying array of organised criminal groups (BACRIM), remaining guerrilla groups and other armed gangs, many of which have more than one name.

The biggest and most well-known paramilitary group is the Urabeños, also known as the AGC (Autodefensas Gaitanistas de Colombia) or the Clan del Golfo. This group formed after the controversial (and some would say failed) demobilisation of the Autodefensas Unidas de Colombia (AUC) in 2004-2006. Another group, the Águilas Negras also emerged at this time.

There’s also Los Rastrojos who, according to InSight Crime, were at one point one of the most powerful transnational criminal syndicates in Colombia. They are active in the Valle del Cauca and Cauca departments, but have been in decline since the capture or surrender of a number of their leaders.

Then there are the other guerilla groups such as the ELN, who have just begun formal peace talks with the government. But don’t forget about the smaller ones such as the Ejército Popular de Liberación (EPL) who partially demobilised in 1991 but will now be looking to take back some of the power they lost.

On top of that, we are seeing small breakaway FARC groups, or the active recruitment of former FARC soldiers by groups like the Urabeños and the formation of new illegal groups like the Nueva Orteguaza in Caquetá.

Related – AGC: The writing’s on the wall

In addition to the activities of these myriad groups, Attorney General Néstor Humberto Martínez has expressed concern about possible collaboration from the armed forces, police and local authorities. As the territories descend into a free-for-all, residents report that the state forces are at best ineffective, and in some instances actually part of the problem.

Should we be worried?

Put simply, yes. Aside from the obvious concern over the deaths of community leaders and the perilous situation that faces these communities, the violence puts a big question mark over the government’s ability to maintain the law and order that will be crucial for a lasting peace. Establishing a state presence in these regions will also be essential if the government is to succeed in implementing any form of land reform, illicit crop replacement schemes or planned infrastructure development.

On top of this, there are fears of a repeat of the massacre of the members of the Unión Patriótica that took place in the 1980s where thousands of its members were wiped out by paramilitaries. This was a key concern during the peace negotiations and one of the reasons that the agreement contains firm commitments intended to protect against paramilitarism and dismantle remaining neo-paramilitary structures.

So what is the government doing?

Speaking on February 3, upon the signing of the Law for the National Commission of Security Guarantees that was part of the peace agreement, President Juan Manuel Santos stressed that, “a single murder is one too many”.

He said that (amongst other things) he has instructed the commander of the army to personally take charge of the operations. Additionally, the minister of defence has dedicated 68,000 troops to reclaim the space, attack illegal groups and cut off their funding and mobility corridors.

“Any criminal who intends to arrive in these territories and take control of them will be met with the full presence and power of the state forces,” he said.

The National Commission of Security Guarantees will have its first meeting in Cauca, one of the areas most affected by this type of violence, and will be responsible for forming and implementing a permanent action plan to ensure the safety of all social leaders.