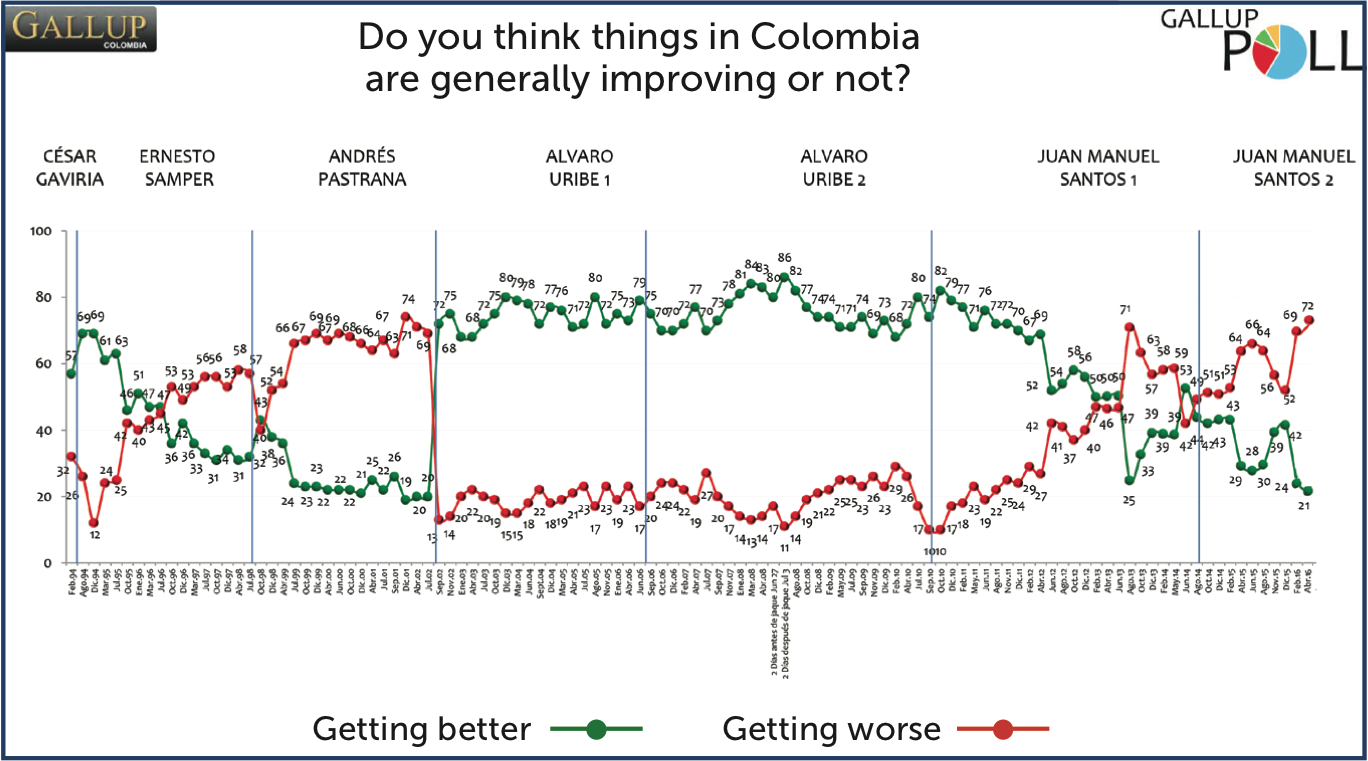 Figures from the latest Gallup poll reveal high levels of dissatisfaction with President Santos, his government and many of the country’s institutions.

The April survey shows that just 21% of respondents approve of the way Santos is running the country, while a whopping 72% disapprove. This is the worst approval rating of his presidency, worse than the dip in August 2013, after a two week farmers strike almost brought the country to a standstill.

People are pessimistic on key issues such as the insecurity, corruption, unemployment, the fight against trafficking and insecurity, registering the highest disapproval rating in six years for several policies.

Related – Who’s in the cabinet?

The results also reflect widespread discontent with the country’s institutions. Disapproval ratings for the congress and the police are at their highest in decades, while the attorney general and the constitutional court also registered low levels of confidence.

Simmering tensions, as one of the three biggest parties in the Unidad Nacional coalition threatens to pull out, do little to increase public confidence.

Co-chairman of the Liberal Party, Horacio Serpa, wrote on May 2 in a regular opinion column, “We are no longer interested in continuing with Unidad Nacional.”

The party felt they were not adequately represented in the new cabinet and were unhappy with the president’s decision to exclude their candidate, Jorge Perdomo, from his three nominees for Attorney General.

“As the President has the right to choose his partners and to push the policies and programmes he believes in, so the Liberal Party also has the right to accept his decisions or not and to support his proposals or not.”

However, the storm may yet pass, especially as the liberals have continually reiterated their commitment to the peace process. Representatives of the Cambio Radical and the U party, two of the other main players, expressed support for the coalition. And following a meeting on May 10 between Santos, Serpa, and the party’s co-chair, Fabio Amín, at the Presidential Palace, the tone was a lot more conciliatory.

“The Liberal Party contributed to the election of President Santos, supports his management and maintains a direct relationship with the president and his government, without intermediaries”, they said.