The communities surrounding Hidroituango dam remain at high alert after the energy company EPM has once again raised alarms over the troubled project. Continued landslides over the last week resulted in a red alert as the risk of flooding is now the highest it has ever been since the first evacuation occurred on May 16.

EPM have been working to increase the height of the dam’s crest from 412m to 415 to avert the Cauca river from spilling over and flooding the low lying villages below like Puerto Valdivia,  Puerto Antioquia, Cáceres and Taraza. The civil defence organisation DAPARD Antioquia have released an image (see below) listing the villages most at risk and the estimated times that villagers would have if the dam’s crest were compromised. If the water levels were to increase beyond the crest elevation, the people of Puerto Valdivia would have 48 minutes before the resulting deluge reaches their homes. 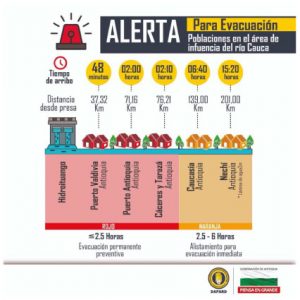 The villages of Puerto Valdivia, Puerto Antioquia, Cáceres and Taraza are now ghost towns as their populations have been evacuated. Over 25,000 people are now living in camps in Valdivia, a neighbouring town at a higher altitude.

To make matters worse, an enormous landslide now obstructs the way to Valdivia that has not only blocked oncoming traffic, it has also jeopardised the town’s aqueduct that transfers potable water to the village.

Although Valdivia is now the focus of the civil defence efforts, the village of Sabanalarga, another affected region southwest of the dam , has received almost no assistance or attention from the media according to the members of NGOs like Rios Vivos. Sabanalarga is now housing many evacuees from low-lying veredas who, according to the NGOs we spoke to, are not receiving sufficient help for their plight.

The danger posed by continued tremors led to a temporary evacuation of all dam workers as well, when a landslide blocked off a tunnel within the dam which sealed off the only entrance into the village of Ituango. The villagers of Ituango is now completely sealed off to all vehicles with the only possible passage in and out of the village by boat along the Cauca river. The village is still calm despite the difficult circumstances, though if the roads remain inaccessible the pressure will continue to build on the village’s resources.

EPM have claimed that a ferry large enough to carry heavy-load vehicles will be made available this weekend to ensure safe passage for vehicles stranded in Ituango though this has yet to materialise.

At the town’s sports hall, dubbed El Coliseo, many of the displaced baraqueros (traditional miners that pan for gold) have pitched tents alongside a group of psychologists, activists and photographers from Medellín that had come to assist those most affected by the crisis.

One baraquero named Oliva told us that the rising waters had all but destroyed her practice of panning for gold as the sands were no longer accessible. She now stays in a tent with her daughter and her granddaughter in El Coliseo waiting for some respite from the continued environmental damage the dam has wrought on her way of life.

José, a clerk at one of only two gas stations in Ituango, told us that the last time a tanker had come to replenish reserves was on 24 May and that in another ten days they will need more. “We haven’t heard anything from EPM but we hope they open the roads soon.” José said.

The same can be said of perishable goods with many of the vegetable stalls and supermarkets running low on vegetables that have been affected by the closure. There have also been knock-on economic affects with many restaurants and shops now seeing a downturn in sales. One restaurant owner also expressed his concerns about the rise of criminal bands (known as BACRIM) which have grown in strength in the power vacuum left when the FARC disarmed in the region following the peace agreement. “It’s at times like this that [the criminal groups] increase their activities,” the restaurant owner said.

The communities of the region, particularly the displaced, require assistance at this troubled time. Rios Vivos have collection points in Medellín and Bogotá for people to donate clothes, blankets and cleaning kits for those affected.You can also see here how best to help Red Cross Antioquia, who are providing assistance to the evacuees in Valdivia. 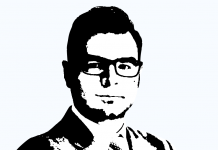