The chief reason for the decline in the peso’s value is the price of oil. In June 2014, oil made up approximately half of Colombia’s export revenues, but since then oil prices have seen similar declines.

As prices for Colombia’s main export drop dramatically, there is significantly less demand for pesos; decreasing the currency’s value.

Related – Guide to the ups and downs of the Colombian peso

The weak peso is not an entirely bad thing – it’s a boom for tourism coming into the country and helps Colombian exporters, whose products are significantly cheaper than a year ago.

Yet foreigners earning pesos are feeling the pinch. Trips home to the United States, England and elsewhere are significantly more expensive. So too are products imported from abroad, so you might want to think long and hard about how much you really enjoy that tea, imported beer, and peanut butter or marmite for your toast.

Don’t hold your breath expecting to see relief anytime soon. The US central bank is widely expected to increase interest rates later this year to protect against inflation, as the US economic recovery finds its legs. An interest rate hike would likely hurt the peso even further, at least against the American dollar. 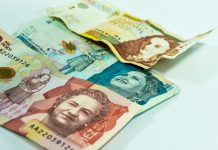