It is still a full three months until the World Cup in Russia kicks off and Colombia’s opening game won’t be until June 19, but the yellow fever is slowly starting. How are the key Colombian players doing in the run up to the friendlies against France and Australia?

At the World Cup the team will be built around James Rodríguez. The loan-move to Bayern Munich has been hugely positive for Colombia’s star man, a regular starter for a team who are one of the favourites to win the Champions league this year.

Striker Radamel Falcao is on his way back from a thigh injury that has kept him sidelined for a month, but before that his form was very good with a brilliant average of one goal per 100 minutes for AS Monaco in all competitions.

The biggest question mark hangs over Juan Guillermo Cuadrado. The right winger, currently at Juventus, underwent an operation in January for a recurring groin problem that has kept him out since Christmas. His return is scheduled for the end of March which should give him enough time to get in shape for the opening game against Japan on June 19.

Goalkeeper David Ospina is still second choice at Arsenal, but when called upon in the Europa League and the domestic cups, he hasn’t disappointed. Ospina has always excelled for Colombia, but the main worry is that there isn’t a quality replacement for him. 21-year-old Ivan Mauricio Arboleda could be the surprise back-up. The goalkeeper is experiencing a quick breakthrough at Argentinian side Banfield, but with only 17 games of professional football under his belt, he is not yet to be relied upon.

Related: Players to watch in the domestic league this season

The centre of defence is one of the strongest areas in Colombia, with Davinson Sánchez having established himself in the Tottenham Hotspur defence after a sensational start in England. His partner in defence, Yerry Mina got a dream move to Barcelona, but is the fourth centre back in line at the moment and lacks game time. The same goes for Cristián Zapata who is not the first choice under new AC Milan manager Gennaro Gattuso and only clocked up one start in 2018.

The midfield is the area where there are many candidates for only two places, but manager José Pékerman’s trusted lieutenant Carlos Sánchez seems to be the first choice. The holding midfielder made a move to Espanyol in January in search of first team minutes and it seems to have done him well as he is always one of the first names to appear on the team sheet in Spain.

Colombia will give a glimpse of their World Cup squad when they play a friendly against France and Australia in the upcoming international break. Times mentioned are in Colombian time (UTC -5)

Manager José Nestor Pékerman picked the following squad for the friendlies against France and Australia. 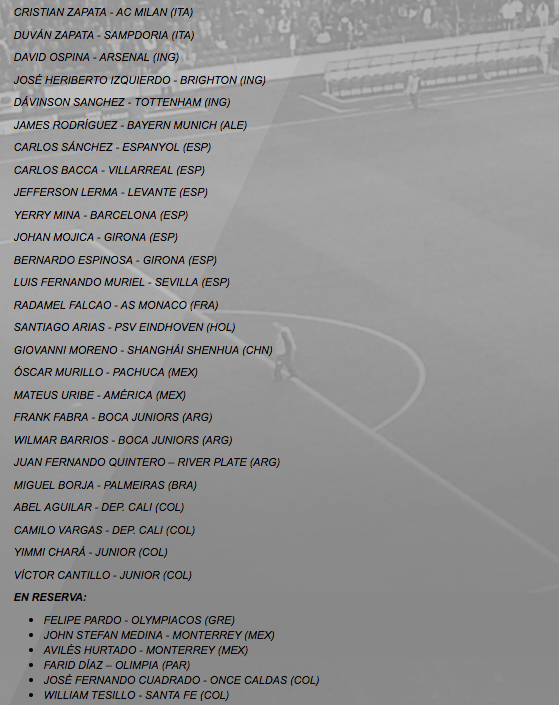