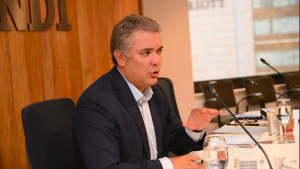 A week out from assuming the presidency, President-elect Duque has made good on his promise to fill his political cabinet with women. Of the 16 appointments he has made since winning the presidential runoff in June, eight are held by women politicians, in addition to having Colombia’s first female Vice President Martha Lucia Ramirez in his inner circle.

A gender-balanced cabinet had been one of Duque’s pledges when running for election and, despite often being seen as a liberal ideal, the conservative President-elect has pushed through with ensuring women hold important cabinet positions within his government.

The cabinet members include Nancy Patricia Gutiérrez who will be Minister of the Interior and Gloria María Borrero who will take on the position of Minister of Justice. Other ministerial portfolios taken on by women politicians include IT and Communications, Labour, Culture, Transport, Mines & Energy and Education.

The news of Duque’s choices come at a time when women have seen great strides within political circles in Latin America, including the most recent elections in Mexico where nearly half of all parliamentary seats were won by women.

Despite the positive news, however, many nations still lag behind in establishing fair representation in politics. In a 2017 OECD report entitled Government at a Glance, it was found that a third of parliamentary seats in lower houses across OECD legislatures on average were filled by women politicians and that number is similar among cabinet positions within the economic bloc as well. Only 29% of OECD legislatures are women, according to the report, though many have put in legal quotas to ensure equal representation as well.

Having joined the OECD this year, Colombia will look to lead on important issues like women’s rights and equal opportunities within the workplace. Although an important symbolic victory for women, Duque’s government will also be judged on its practical results for women in society, particularly in relation to the alarming rates of violence towards women in a country where a woman is killed on average every three days.

Duque will be sworn-in to office on August 7 and a full list of his cabinet members is as follows: