The biggest sports event of the year, the Olympic Games, will come to Rio de Janeiro in August. Colombia is hoping to achieve yet another record breaking performance, even though lots of athletes have yet to come through the pre-Olympic qualification tournaments. In this monthly column, The Bogotá Post will keep you up to date on the Colombian preparations for the world’s biggest sporting festival

With six months to go before the opening ceremony on August 5, Colombia already knows that it will have at least 74 participants at the Olympic Games. Colombia is aiming for more – in the hope of breaking their record of 104 competitors in London 2012 – and the prognosis is positive.

So, who’s already on the list? Well, the women’s football team make up 18 of them, in the team’s second appearance after debuting in London 2012. Under the command of manager Felipe Taborda, Las Cafeteras, who have yet to record their first Olympic win, are competing with host nation Brazil and ten other countries to take home a much coveted medal.

In the men’s football tournament in Rio, 16 nations will compete with their U23 teams. Los Cafeteros are a stone’s throw away from qualification after finishing second at the Copa América 2015. The Colombian side, under the command of manager Carlos ‘Piscis’ Restrepo, will play a deciding playoff in March against the United States.

In rugby sevens, the Colombian women’s team is already gearing up for the scrum, following their success in the South American qualification tournament in July 2015. Las Tucanes will send 12 players to Rio. It will be a landmark tournament, since rugby sevens is making its debut at the Olympic Games. The women, coached by Laurent Palau from France, will compete against 11 other nations for their place in history.

In athletics, the name of the title favourite in the triple jump discipline, Caterine Ibargüen, jumps out straight away. The leaping lady will go to Rio accompanied by 20 other athletics contenders, who have already made the Olympic qualifying standards. In both the 20km and 50km men’s race-walk, Colombia will be represented by three athletes, which is the maximum number allowed.

There’s currently only one athlete lined up to represent the country in aquatic sports. Jorge Murillo qualified at the Pan American Games in Toronto last year for the 100 and 200 meter breaststroke. However, he may not be alone for long. Sebastian Morales and Sebastian Villa will compete in the Olympic qualification tournament in Rio for a place in the synchronised three metre springboard diving from February 19-25.

Meanwhile, Juan Guillermo Ríos and Victor Ortega will try to seal their ticket to Rio in the synchronised ten metre platform diving competition, and Diana Pineda is in the race for the three metre springboard qualification. 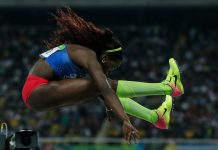