A stunning home run from Dilson Herrera, a prospect for the New York Mets, at the bottom of the eighth innings, saw the Colombian baseball team defy the odds, defeating favourites and baseball giants Panama and qualify for the World Baseball Classic (WBC) for the first time.

The final qualifying match was a tight and tense affair dominated by the pitchers. In the fourth innings Panama finally broke the deadlock between the teams when they scored their only run of the deciding match, and it took another two innings before Colombia could match that effort. Herrera, however, saved his heroics for late on in the game, with a huge blow to deep left field, allowing Colombia to take the lead in the match for the first time, holding on for a final score of 2-1.

Held in 2006, 2009 and 2013, the WBC is a 16-team sanctioned baseball tournament, which also includes the involvement of Major League Baseball (MLB) professionals. It was won twice by Japan, with the Dominican Republic the current title holders. The fourth edition of the event is scheduled for March 2017, with Colombia making their debut.

In the early ages of international competition, Colombia won the Cuban dominated baseball World Cup twice, in 1947 and 1965 (both held in Colombia). After achieving third place in 1974 without amateur players, the country only sporadically featured on the margins of international tournaments.

Colombia is not one of the favourites to win the 2017 edition of the WBC, but with nine Colombians currently active in the major leagues in the USA, all eligible for the national team at the WBC, they are not to be overlooked. The most well known is Dilson Herrera, an infielder for the New York Mets. Buster Olney, a well respected commentator from ESPN, claimed that “In three years, Herrera will be an all-star 2nd baseman”.

The longest serving active player from Colombia, is former Philadelphia Phillies relief pitcher, Ernesto Frieri, having made his debut in 2009 for the San Diego Padres before moving to the LA Angels, the Pittsburgh Pirates, and finally settling at the Tampa Bay Rays for an extended spell. His contract with the Phillies ended on April 5, 2016 and he is currently in search of a deal that will extend his career in the MLB.

Other active players include brothers Donovan and Jhonatan Solano, from Barranquilla, who play for the New York Yankees and Miami Marlins respectively, currently both serving in the minor league of their major league team outfits.

Exact dates of the tournament – which has been held in the USA on each previous occasion – are yet to be released, but it is expected to be held in March 2017. Colombia will be hoping to make an impression on their first appearance, where they may come up against the likes of the USA, Japan, Cuba, Puerto Rico, Dominican Republic and Canada. 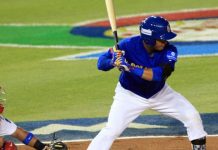