Colombia missed a unique chance to move up to the world group of the Davis Cup tennis tournament in 2016. In Pereira’s brand new Estadio Santiago Giraldo ‘the tricolor’ lead by the world number 59, who gave the stadium its name, faced Japan, who boasted world number six Kei Nishikori in their ranks in the world group play-off.

Day one, on September 18 ended as expected, with a victory on both sides. On Saturday the doubles match saw the Colombian team of Juan Sebastián Cabal and Robert Farah win to take a 2-1 lead into the final day. Sunday saw Nishikori easily overcome Giraldo to set up a decisive fifth rubber between Taro Daniel and Alejandro Falla, on paper an even game with the players ranked number 124 and 125 in the world. The Japanese player took the victory 7-6, 6-3, 6-2. Falla was devastated after the defeat. “This is a heavy moment for me, I hadn’t thought I’d lose this game.” Colombia will start 2016 in the highest South American group, starting a new battle for a spot in the world group for 2017.

In the World Wrestling Championships in Las Vegas, United States, the Colombian women’s delegation assured two spots for the 2016 Olympic Games in Rio de Janeiro. In the women’s freestyle 60 kg, Colombian favourite Jackeline Rentería won her first three matches before being ousted in the semifinal by the winner from Japan, Kaori Icho. Rentería went on to lose the bronze-medal match as well, leaving her without a medal qualifying for Rio but failing to take a medal. Andrea Olaya competed in the women’s freestyle 75 kg and went through the tournament the exact same way as Rentería. The wrestler from Huila won her first three matches before Chinese Zhou Qian got the better of her in the semifinal. Olaya also fcame up short, leaving the Colombian delegation without podium finishes but with two Olympic qualifications. 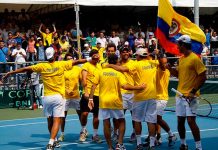