Luis Fernando López is somewhat of an institution in Colombian race walking. World Champion in Daegu, Korea in 2011, the games in Rio de Janeiro will be his fourth Olympic appearance. His best result was in Beijing 2008 where he achieved ninth position in the 20 kilometre race walk. The Bogotá Post spoke to him ahead of his fourth and final Olympic competition.

Luis Fernando López, The 37-year-old athlete will be powering through the streets of Rio on August 12, but had originally intended to do the race on August 19 as well: “I will only be competing in the 20 km race walk. I wanted to do the 50 km as well, but I had a virus at the World Championships in Rome earlier this year and couldn’t ratify my time.”

After participation in Athens, Beijing and London, it is the first time the big event will be so close to home. An advantage, he thinks: “Here in Brazil we Colombians are the locals, they are our neighbours. It is different from other games that were far away from here. What is very difficult in Brazil is the humidity, but we are really close to the tropics so these are climatic circumstances that we know how to handle, it should work in our favour.”

López continues, “I hope my family will have the possibility to go to Rio. I want them to join me, since it will be my final Olympic Games. I hope that the fact that we are close to Brazil gives my wife, my daughter and my dad the opportunity to come and cheer for me, giving me energy to achieve better results.”

The athlete from the Nariño department also has a world championships gold medal to his name, though under frustrating circumstances. In 2011, at the IMF World Championships in Daegu, South Korea he came third in the 20km race walk. Then this year, the athletes who took both first and second places were disqualified for doping.

On March 24, 2016, López was belatedly crowned 2011 world champion. “The celebration for that gold medal was very quiet. During the last years we all saw it coming. The international athletics tribunal had already taken its decision and it was waiting until the Russian athletes and federation had made their defence for the ruling. I took it calmly, with lots of great memories thinking that I could have been the best in the world and that at the Olympics I still can.”

“The Olympic Games are a spectacle without precedent, with sports that you don’t see every day. I see the whole country going crazy for the national football team during the Copa América, but very few people know what the race walk is. The Olympic Games serve to show that there are more sports. Every four years there are athletes who try to be recognised by 48 million Colombians. They want the people who are watching and listening to feel well represented by the athletes. So I want to say that these taxes are well invested.”

“At these events, what we want to achieve is that the less popular sports are seen by our kids so that the younger generation will also join these sports. It was one of the legacies from the Olympic Games in London. In Colombia, lots of BMX clubs try to copy what our medallists [Mariana Pajón won a gold medal and Carlos Oquendo a bronze] did in London.”

The unique mood in the Olympic village is something that López is really going to miss: “The atmosphere in the athlete village has a special tension. You can breathe it because everyone dreams of a good performance, you can feel the anxiousness to perform well around you. It is like university for athletes. At school, everyone attends classes and has fun, but you go because it is obligatory. At university though, that changes, you do it because it is what you want to do, it comes from inside you with different responsibilities.”

López is very much aware of the impact he and Caterine Ibargüen have had on athletics in Colombia. “I feel that athletics has been on the rise in comparison with all professional sports in the country. The results that Caterine Ibargüen has had over the last years, winning an Olympic silver medal, two world championship titles and various diamond league victories has helped to position the country in a different way in the sport. The position of athletics in Colombia has gotten a lot stronger with Caterine and young athletes like Eider Arévalo on the race walk and Mauricio Ortega on discus throw.”

“For this Olympics we had seven Colombian athletes achieving the minimum limit to qualify for the games in the 20km and 50km race walk. Unfortunately only three athletes per country can compete per discipline, but it speaks even more for our athletes who qualified for this discipline.” And he adds, “Most of my colleagues are around 25 years old, but I am 37 now. I am proud to be part of the Olympic Games again”.

Related – Day by day: Our guide to Colombian participation in Rio

López acknowledges the help he was given in difficult circumstances. “I can say that the support I have received has been good. I have had financial help when I needed it. After the Olympics in London I suffered from injuries and I had to have subsequent knee operations, but I always received support from the federation and the Colombian Olympic Committee. I also have to say that my employer, the Colombian Police Force, has always given me unconditional support and the economic help you need to get to a level that is the Olympic Games.”

At the height of his career in London 2012, he was in the leading group when he was shown the red paddle signifying his disqualification for loss of contact, one of the biggest disappointments in his career.

This was down to one main rule in race walking, that the athlete’s toe cannot leave the ground until the heel of the front foot has touched the ground . The third strike sees athletes out of the race, which is not uncommon in elite races.

That red paddle is the reason Rio 2016 will not be his last big event, “It is my last Olympics, but I am planning to continue for another year. I have always loved the world championships and this one will be in London, the place where I had one of my biggest frustrations and then I will dedicate more time to my family and my work. First, I want to fulfil my dreams in Rio de Janeiro.” 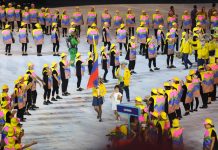