The Bogotá half marathon happening tomorrow will gather thousands of people from different countries.

For a lot of people, the first thing that hits them when they travel to Bogotá is the altitude. To be gasping for breath after climbing one measly flight of stairs can be embarrassing, but it’s all understandable when you take into account that Bogotá lies 2,640 metres above sea level.

That’s why the annual half marathon in Colombia’s capital is so impressive. Each year, around 45,000 brave and determined runners take part, with competitive runners flocking from all corners of the world to put their running skills and fitness to the test.

Related: Bogotá on the run: Running in Colombia

Winners of the city’s half marathon have been from a mixture of countries over the years, from Mexico and Peru to the more predictable Kenya. Colombian José Alrio Carrasco made his country proud in 2003 by finishing first place but as word of the annual event spread, top class runners started flying in to up the ante. The top places have been dominated by African runners for the past 14 years, with the Kenyans Geoffrey Mutai and Susan Chepkemei holding the course records and Ethiopeans Betesfa Getahun and Netsahet Gudeta reigning champions.

The popular event proudly holds IAAF Gold Label Road Race status, making it the only South American race to achieve such accreditation. It is still in its youth, only having first graced the streets of Bogotá in 2000. However, this year there is sure to be an even bigger buzz surrounding the event as it is celebrating its 20th birthday, so if you were searching for motivation to take part, you’ve just found one. Take note that you have to be over 20 years old to take part.

This event is wonderfully inclusive, as there is also the ‘Jumbo-metro’ race of a more manageable distance of 10km for those 14 years old and above that takes place on the same day, but follows a different route.

And of course, if you don’t want to run you can still take part by cheering the runners along the route.

This year the 21km course will start at Parque Simón Bolívar on Sunday, July 28 at 9.30am.

Today is the last chance to register at Corferias 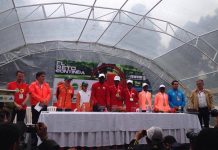