It’s a dangerous world out there for cyclists- Oli Pritchard looks at how to minimise the dangers and improve bicycle safety.

Bogotá has a tremendously high accident rate, most of which are caused by idiocy and ignorance, both sadly all too common in this miserable world of ours. You can’t affect other people’s brains, but you can shift the odds and improve your bicycle safety.

Cyclists often say “I fell off” when what they really should say is, “Some stupid idiot in a car took me out because their mobile phone was more important than being a good human being” or “I made the wrong decision and sailed out in front of a car doing 40”.

Same result in both cases…bang! And that bang is between one person in a giant armoured environment-despoiler with airbags and roll cages…and you in 3mm of lycra and all-too-breakable bones and skin. You might be a better human being than a car driver, but you lose in collisions. En-fucking-tonces, avoid them.

The first and most important things to learn are anticipation and decision making. Anticipate what will happen and you won’t see trouble, take the right decisions and everything will run smoothly. But how?

Well, first you have to control as many variables as possible. Even before you jump on the saddle, make sure your nuts are tight and you’ve not shot your bolt(s). Make sure brakes are working and tyres have both tread and air. Is it dark? Will it be later? If so, you’ll need some lights.

These don’t have to light up your life, but they do need to let people know where you are. If in any doubt, flag a taxi, jump in, go past any of the dark riders at night (a slew of good metal band names this week) and you’ll quickly realise just how invisible they are. What you can’t see, you can hit. 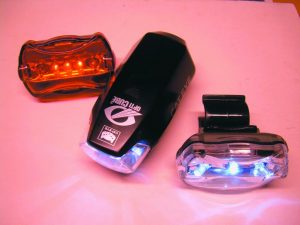 In my [controversial – ed] opinion, helmets and body armour are often more for your peace of mind than to save your body. Motorbike helmets are actually designed to prevent injury and yet thousands of motorcyclists still die every year. There are plenty of arguments on both sides and in the end it is your decision. But if you do wear a helmet, at least make sure it is the right size and fit. For me, other than in races, I’ve used no more than a lot of hair/fur and a bandana for the past 16 years. It keeps me cooler, both in look (hair this beautiful shouldn’t suffer helmethead) and heat, and allows me easier glances behind. On the other hand, some of my best friends are helmet-wearers.

Check your route if you can. Anticipate if there are any sketchy parts and if you can avoid them or what steps you can take to avoid trouble. For example, Septima in the centre can get dodgy late at night. However, you can wait for taxis and use them as a flak-reducing convoy.

Taxistas are generally aware of the fact they’re carrying money and are often fearsomely sociopathic. As such they tend to aggressively ward off potential carjackers. They’re a lot more intimidating than you and are certain to come out on top in a collision with a ñero, unlike you.

Think about the road surface…where are the holes, where are the tricky junctions? Once you’re on the road, plan for where you should be riding. Many cyclists seem to want to ride in the gutter. Well, Wilde was wrong: we’re not all in the gutter. 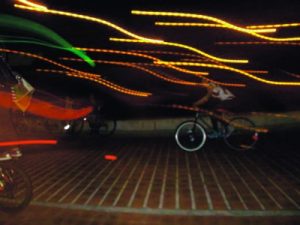 Use the inside lane, generally, about a metre and a half from the kerb. This gives you space to move in to avoid holes or manoeuvre outside to get round parked cars and taxis and the like. It also allows you to get around busetas with ease and provides a buffer zone for unwary pedestrians. Finally, the gutter is usually full of glass and worse, underground access plates which are often torn up by metal thieves (there’s another band name). Go down one of those and you’re in big trouble.

Watch wheels. Watch them like you fixate on soul-destroying pornography, brain-eroding TV or vomit-inducing kittens gambolling in fields. Basically, any given vehicle has to follow the wheels. Disregard the indicator lights and look at where the wheels are pointing. Where the car is right now rarely matters…where it will be is everything you care about. Live in the future. Look at the pavements – if there’s big lines of people waving at taxis in that terribly common and unregal-parasitic manner…well, you have expect buses and taxis to follow the money, and conversely, cars to pull out to avoid them.

As before, think about the route. Be ready for turns: getting in the right lane at the right time makes everything easier. Around a minute or 200 metres from the turn, you should be looking back to check you can get across traffic. If you know certain lights are slow or fast, time your sprints to coincide with them. Traffic is remarkably predictable and any given route you regularly ride you’ll quickly come to know.

Be aware of what traffic will want to do. It might seem as though folk are careening around wildly like drunk kids on dodgems chasing puppies, but in fact most people know exactly where they’re going and why. If a big right turn is looming, expect cars to start moving inside and be ready to let them in. Don’t be surprised when cars try to swap lanes to get ahead in a traffic queue.

When choosing a route, don’t think ‘most direct’ as though you were walking. Instead think about road quality, safety of barrios, lighting, bus usage and pedestrians. For example, the Caracas is quite scary looking, but in actual fact is a good ride. There are few large vehicles and few crossing roads. The road quality is pretty good and there are neither many pedestrians crossing nor cars pulling inside.

Many routes are dark at night and big roads often provide more security. The last thing you want to be doing in an unknown barrio is getting off and walking slowly with a heavy bike across a stretch of road that wouldn’t look out of place in Homs. You should stick to main, well-used roads generally and try to keep up a pace that means no one can easily chase you.

Remember: you can always give up on the road and consider the ciclorutas. This is really only advisable for those that can bear to travel at very low speed, however. Also, it’s borderline immoral, as bicycles should be part of the traffic and not sectioned off like dangerous criminals.

If you need to, you can always get off and push. Nothing should compromise your safety. You might feel a bit silly pushing your bike, but no-one else is likely to care…and once you’re past the big ol’ junction you can jump back on and be on your merry way.

Last things last, ride safe out there. Do all you can to minimise the chances of an accident. It’s not that dangerous, but accidents can happen, even to the best riders.

This column is dedicated to Sebastian, Henry and the work of the LCEF and BMEF (who offer financial aid and support to injured bike couriers until they can get back to work) and associated projects around the world.