All eyes are on Medellin’s World Bicycle Forum, BikeFest, but Bogota is putting on its own cycle-themed event, as Oli Pritchard explains

So the World Bicycle Forum came to Medellin, but you didn’t have a ticket and it’s too far to cycle? Apart from the advice that you should toughen up the legs with the stretch up from the Magdalena river, that seems a fair call. The Bike Forum, BikeFest, is a great idea, quite organic but a bit hippy for some folks’ tastes. Luckily, whether it be from aversion to soap-dodgers or simple finance/schedules, if you’re not going to the City of Eternal Spring there’s an event coming up soon in Bogota, too.

The Bogota BikeFest takes place on March 8, right on the ciclovía, where 93 meets 15.  Strangely sponsored by City Parking Bogota (for a company that ostensibly supports our enemies, they do a lot of work with bikes), it promises to be a fun blend of events ranging from gastronomy and graffiti through to music and art.

Underpinning everything of course will be a firm focus on bikes. The organisers have made sure that all forms of bike culture will be represented, so the kiddies with their BMXs and mountain bikes will be tolerated, and I’ll be a monkey’s uncle if there aren’t a shedload of ultra-hip fixies being paraded around by extravagantly-bearded young gentlemen.

Sadly, it’s unlikely that Tino from Medellín will be attending, but Bogota is chock full of super cool tiny frame builders who will knock up a bespoke frame with quality tubing (usually Columbus, although there are some Reynolds users) in whatever shade of the rainbow you like for much cheaper than back home.

Getting hungry won’t be a problem, as many food trucks and the folk behind the sporadic Bike Picnics will be around. Just be aware that eating at a Bogota food truck often requires a second mortgage, so a cheap empanada down the road might be on the cards. Then again, if you’re a cyclist, you should be aiming to be as thin as possible, so maybe stick to energy drinks and power bars instead.

Artistic interventions have been advertised which will either be fun or displays of mime artists and payasos prancing about. More grown up is the chance to get your frame resprayed by professionals of which there are a fair few about. The music is sponsored by Red Bull, which means you might want to pack earphones.

At the end of the day though, whatever clowning and awful music one might have to endure, it promises to be a good diversion just off the Ciclovía on a beautiful Bogota Sunday. Come on down and help build the velorution that’s taking place in Bogota right now. You don’t have to drop 6 million pesos on a super cool time trial beast that looks fast when it’s standing still to enjoy the show.

More likely, you’ll encounter something you’d never thought of before and get the chance to enhance your bicycling pleasure. Because if cycling isn’t fun and fulfilling, then it’s a waste of everyone’s time. From kids mucking about on BMXs to the chance to register your bike with the police, it’ll be a grand celebration of all things bicycle related, and a chance to get started in the saddle for 2015!

The World Bank helps pump up Bogota bike use 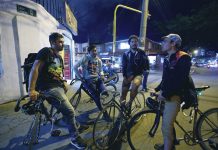