Attendees can look forward to a range of performances catering to all tastes, from to theatre and dance.

If you missed out on catching Teatro Colsubsidio’s showing of Broadway musical Beauty and the Beast, you will no doubt be sorry to hear that it was well worth seeing. Directed by Disney specialist Lynne Kurdziel, and starring Juliana Reyes as Beauty with Felipe Salazar as the Beast, accompanied by a live orchestra, it was a theatrical and musical treat for all ages.

Luckily, their schedule for the coming months looks set to provide just as much universal appeal, bringing a huge variety of performances to its stage. They have seven different categories, with theatre, dance performances ranging from classical to tropical, to jazz. The theatre seeks to highlight and to celebrate the creativity of the people of Colombia’s and to encourage plenty more of it.

As the theatre bosses out, Teatro Colsubsidio is not just about spectacular performances, but about “encouraging the culture of knowledge” in Bogotá, and “opening the door” for people to visit Colsubsidio and other venues across the city. It doesn’t seek to compete with other theatres, but rather to develop the culture that they are all part of.

Related: Betty La Fea is back in theatres!

The theatre is proud to be one of the host venues for the International Festival of Classical Music, currently taking place across Bogotá. With its fourth edition focusing on the German Romantic Composers, this year’s festival is going by the title of Bogotá is Brahms, Schubert and Schumann, and promises to be a treat for classical music buffs and casual listeners alike.

On April 25 and 26 the theatre will present Á Restrepo’s Animal Family, an analogical analysis of human and familial relations, whilst May brings Nahuel Pennisi to sing at Teatro Colsubsidio, in what will be his first performance in Colombia. The singer and guitarist already staking his claim as one of the greats in his native and now brings his renowned rhythm and creativity to an audience in Bogotá.

Looking further ahead, tickets are already available to witness ballet dancer Fernando Montaño in action along with the star soloists of the London Royal Ballet at the beginning of August, in a highly anticipated performance after the global star chose to take a sabbatical in order to focus on his autobiography. Montaño is famous not only for his talent and the grace of his movements, but for his story, which has seen him go from dancing in the barrios of Cali, to the Cuban National Ballet School, to dancing on the stage at the Royal Opera House in London and becoming the first Colombian to join the London Royal Ballet.

These are just some of the performances in store from the theatre. For more information, check out the full programme on their website. Tickets can be purchased via Primerafila. 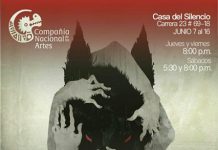 FITB: Theatre on the international stage