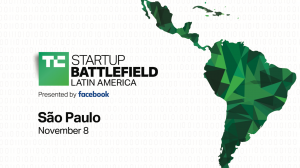 This November, TechCrunch will host its premiere startup competition for the first time in Latin America and will now be open to Colombian entrants too.

Startup Battlefield, an event in which leading early-stage startups compete for a cash prize, media attention and investment, will be hosted at the Tomie Ohtake Institute on November 8th in São Paulo, Brazil. The organisers hope to unearth exciting projects and learn more about the expanding tech scene in Latin America.

Entering the competition is free, but startups will need to meet the following requirements:

Eligible startups can apply online until August 6th, at 5pm PST, via the TechCrunch website. Following the deadline, applications will be reviewed by the editors of TechCrunch and 15 startups will be invited to São Paulo for the pitch competition on November 8th.

In preparation for the event the teams will be required to attend an on-site technical check, where they will receive pitch-coaching from the TechCrunch editorial team to make sure they are in good shape for their presentation.

The competition will begin with three preliminary rounds — each round comprising five startups with a six-minute slot to pitch their product in front of a live audience and leading VC judges. The judges will then have six minutes to quiz participants on their product and presentation. The five standout startups will progress to the final round, where they get a second opportunity to pitch, the eventual winner receiving a $25,000 cash prize, as well as a trip for two people to TechCrunch Disrupt in San Francisco and the chance to exhibit their product at the event and/or compete in the event’s Battlefield.

For the other 14 startups, simply participating in the competition represents a valuable opportunity to gain media exposure, as all pitches are posted on TechCrunch.com and viewed by an international audience. In addition, all 15 participants will join the growing TechCrunch alumni community, which comprises 750 companies, including Dropbox, Cloud-fare, Yammer and Mint.

Since the first event in San Francisco in 2007, Startup Battlefield has been hosted in notable tech hubs such as Berlin, Bangalore and Beijing. Yet recently, TechCrunch has making an effort to reach less obvious destinations. In 2017 it hosted Startup Battlefield in both Nairobi, Kenya and Sydney, Australia, with the aim of finding the most exciting early-stage startups in Sub-Saharan Africa and Australia/New Zealand respectively.

This year, TechCrunch is continuing its expansion into regions with rapidly developing startup ecosystems, with events in Beirut, Lebanon (for Middle Eastern and North African startups) and Lagos, Nigera (for Sub-Saharan African startups), alongside the competition in São Paulo.

The deadline to apply for Startup Battlefield Latin America is 6th August, 5pm PST. Startups can apply via the TechCrunch website.