In the first of a series of interviews with prominent figures on Colombian business culture, Olly West talks to Andrew Wright, CEO of UK Colombia Trade, about what first-timers should expect from a business meeting here

Young British banker Andrew Wright was petrified, running an hour late for his first business meeting in Colombia thanks to a dallying colleague. Upon arrival, though, the meeting proceeded as if nothing had happened, with no excuses from one side and no resentment from the other.

No surprises there, you’d think, given Colombia’s reputation for malleable, at best, timekeeping. But, in the world of business at least, times are a-changin’.

That first tardy meeting was in 2000. Yet last week Wright had a packed agenda of meetings from Monday to Friday in Carta- gena and every single one started on time.

In fact, when a British company visits Colombia they are likely to find potential clients making a particular effort to be punctual, so as to respect the mythical hora inglesa (English time).

“It always generates a bit of mirth on the occasions that I, as the Englishman, am the one who turns up late,” Wright says.

As the head of an organisation focused on introducing British companies to Colombia, a large part of Wright’s job is managing

expectations about how business is done. Beyond the stereotypes regarding punctuality, there are more nuanced considerations foreigners approaching the Colombian market should bear in mind. Companies emailing to request meetings a month in advance are unlikely to receive a satisfactory reply, while not giving enough warning does not work either.

Between 10 days and two weeks is the optimal time, says Wright. It may seem a trite detail, but it’s advisable to get the basics right as doing business in Colombia can be a time-consuming process. Patience is a must.

When you first meet a Colombian business contact, probably 20 minutes will pass before you start talking business. There are about 10 different ways of saying ‘how are you?’

“Most companies come and expect to sign a deal on their first visit, but that virtually never happens,” says Wright. “You have to be prepared to invest 12-18 months and come back every three months to maintain those relationships or it will be very difficult to get things done.”

One reason for this, he says, is that Colombian businessmen are much more likely to work with you if they trust you on a personal level.

“In the UK and many parts of the world it’s ‘hi, how are you, let’s crack on with business,’” says Wright. “Here people want to talk and get to know you. When you first meet a Colombian business contact, probably 20 minutes will pass before you start talking business. There are about 10 different ways of saying ‘how are you?’”

So, what should stiff upper-lipped Brits unaccustomed to talking about personal topics at work prepare to discuss?

“Here people love talking about their cities,” says Wright. “Also,if you have kids then that’s always a popular topic of conversation.”

UK national Andrew Wright has worked and lived in Colombia and Ecuador for more than 10 years, mainly in senior management roles at British bank Lloyds TSB. He was then regional manager for Hansard International, covering the Andean Region. In August 2013 he became the CEO of UK Colombia Trade, a partnership between the British Chambers of Commerce, UKTI and the FCO to drive the growth of British exports to Colombia. 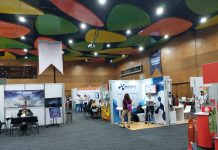