As hoards of football fans travel through Leticia en route to Brazil, Chris Bell recalls his own Amazon river experience, discovering the fine line between natural beauty and a ‘green hell’

I don’t recall at what point I realized we were in trouble. I remember feeling strangely calm after the previous few hours of panic. It felt good that someone was finally acknowledging it; before that I had felt foolish for worrying. Darkness was setting in, and the noises were becoming stranger; the jungle around me was slowly evolving from postcard image to eerie nightmare.

This wasn’t what I had signed up for.

Rewind the clock several hours and I was jumping into a kayak somewhere on the Rio Yavari, a tributary of the Amazon that forms the border of Peru and Brazil for some 500 miles. Our little group had left the Colombian city of Leticia three days earlier, turning up the Yavari and out of Colombia at the Brazilian river town of Benjamin Constant. The journey had gone smoothly up until the last day: swimming with pink river dolphins, catching piranhas for dinner, plucking caiman from the water by torchlight. I hadn’t really come here for adventure, just the chance to see some of the Amazon’s unique wildlife firsthand.

What had really sold me on the trip was this final stage: the chance to take a kayak up a tiny branch of the Yavari which, one way or another, eventually connected up to the Amazon, and would take us back to Leticia. The little channel could only be accessed by kayak, and I was anticipating seeing some great wildlife a little closer than normal. The whole trip would take about four hours. We set off, slowly paddling into the overgrown tangle of trees, which twisted and reached for the light, arching together over the narrow stretch of river, creating the illusion of a tunnel through the jungle. 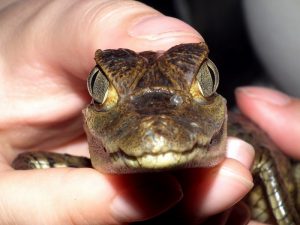 Four hours of paddling later, I had been rewarded for my faith in the jungle’s treasures: tiny bats which appeared from the overhanging branches, then melted away again into the leaves; chattering families of squirrel monkeys swinging through trees so high that I had to crane my neck 90 degrees to watch them pass; an anaconda which slipped unseen from a tree root into the murky waters, leaving only a muddy trail and ripples to alert us to its presence. The kayaks were working; our silence caught the animals off guard, allowing us to appreciate them at close quarters before they dissolved back into the green.

Now this was what I signed up for!

My reverie was soon interrupted by a change in the river. It was getting shallower and narrower, and the light was failing. I found myself having to clamber out and drag my kayak through the thick mud, all the while very aware of that anaconda.

It soon became apparent that my guide had no idea where we were or how long it would be until we arrived at the other side. He mumbled something about the water level dropping. He had forgotten his torch.

At this point I realized we were in trouble. By now it was pitch black. I had never experienced darkness like it; the only light came from a narrow slit of sky forcing its way through the overgrown canopy. One member of the group had an old phone with a feeble torch, but we abandoned the use of it when its flickering beam revealed the red eyes staring back from the river banks. Caiman don’t really grow big enough here to kill a man, but they’d have a toe, and the snakes get a lot bigger.

By now we were having to drag the kayaks through the murky water barefoot, eyes and faces stinging from the thorns which whipped us in the darkness. I saw every one as a snake bite, and felt every thick, sinewy root as the muscular torso of an anaconda. My normally calm exterior was giving way to panic, and it was getting cold.

This was definitely not what I had signed up for. 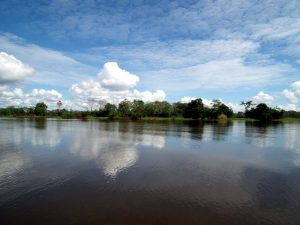 The Amazon is a capricious beast of a river; capable of rising and falling metres overnight, it makes a mockery of careful planning and organization. Imposing straight lines on the jungle is a fool’s errand. The Green Hell they’ve called it. My favourite lines about
the Amazon jungle come from Werner Herzog: “In the face of the obscene, explicit malice of the jungle, which lacks only dinosaurs as punctuation, I feel like a half-finished, poorly expressed sentence in a cheap novel.” Sitting there in the darkness, exposed in my kayak, I was beginning to feel half-finished myself. The only difference was that this trip wasn’t cheap.

Nine hours later, and with the kayaks now roped together for safety, we finally burst through a tangle of fallen trees, rotting in the almost stagnant water, and felt a cool breeze. I lay back in the kayak and stared at the dark sky, shivering in the cold of the night. My arms felt like lead and I was bleeding from hundreds of tiny scratches.

At last Leticia was a straightforward hour’s paddle away and our Amazon adventure was finally at an end.