Home In This Edition Going to Paradise on Bogotá’s TransMiCable

On the last day of the holidays I surprise my kids with one last excursion: the south of Bogotá.

“But Dad, we never go there,” says my daughter, wide-eyed.

True, like many guests in Colombia we explore many remote parts – we’ve just come back from a trip up a volcano – but consider the south side of our own city as tierra incognito, and best left that way.

Sprawling, dangerous and unsavoury, the south side is best seen from a safe distance, like from up on Monserrate. From there the far brown hills are coated by cinder-block barrios as far as the eye can see.  Never mind that it’s home to most of the city’s citizens, much of ‘el sur’ seems like a place many well-heeled rolos would expect to lose their wallets, phone and “possibly a kidney,” as one friend puts it.

That narrative is changing. Just as in Medellín’s comunas, some of Bogotá’s poorest far-flung suburbs are undergoing ‘social transformation through joined-up mass transit systems, in this case, cable cars linked to the Transmilenio bus system’.

I explain this to the kids: today’s goal is a slum perched high on a cliff where roads hardly penetrate.

“Can we buy lunch there?” asks my son, yawning.

An hour later after a short bus ride – and a long discussion on what lunch options might be available – we pull into Portal El Tunal, the Transmilenio terminal where smoky red buses meet TransMiCable electric red cable-car cabins.

It’s only been open a month and everything is shiny and new, with police everywhere, and staff bursting with pride at their new project. And so they should be: it’s amazing. Though you can’t help wondering why the rickety bus network that got us there has fallen into such disrepair, with every glass door broken at every station on the trip down.

But, hey ho, best to look forward – and up – as we glide out into the airspace over Ciudad Bolivar and a bird’s-eye view of the barrios of Las Acacias and the aptly-named Gibraltar, an urban mount rising out of a rolling sea of pastel-coloured houses.

Our ten-seat cabin is almost empty except for Yarini, a nurse coming off shift and returning to her home in the furthest station, El Paraiso. The cable car really has transformed her life, she tells us, saving her hours of commuting every day.

“Before it took over an hour in a minibus to just to reach El Tunal bus station. Now I get there in under 15 minutes,” she says. The cabins are very secure with security cameras and police checking passengers at the stations, she explains. “The only hiccup was the recent earth tremor that stopped the cable.” She was left hanging, but not for long.

As we climb, the yellow houses stack up on the scarred hillsides and mingle with eye-catching graffiti and small parks and plazas. Signs of dire poverty are also present with muddy streets and wooden shacks perched perilously over precipices with rusty iron roofs held down with old tyres and junk.

We alight at El Paraiso on the crown of a ridge of hills which seem like the very edge of the city. But on looking around the barrio we realise that it rolls away west into the valley towards Cundinamarca, joining to similar conurbations that hug the hills east of Soacha.

Still, this is one of the remotest and poorest parts of Bogotá. The giant glass-and-steel cable car station seems slightly out of place alongside unfinished houses and mud roads that form the barrio.

Not that anyone’s complaining. In fact, a kind of ‘TransMiCable euphoria’ seems to have set in, and people want to talk about it.

Related: Summer in the city, things to do in Bogotá

“This is such a boost for the young people here, at last they feel part of the city,” a diner comments to us when we stop in for stuffed arepas at a new café opposite the station.

Sundays are especially busy, explains the waitress Paola. “People are coming from all over to try out the cable car. We had English, Germans, Italians here last week. And even people from the rest of Bogotá.” She laughs.

This unexpected bonanza – that people would come in as well as out – is catching residents by surprise. Locals are friendly but seem perplexed by tourists wielding cameras.

Meanwhile, an explosion of street art, freshly-painted houses, and new businesses does suggest that a sleeping giant is wakening.  Public works appear to be going full bore, and back in the café all talk is of the new football pitches being built nearby. Even the stray dogs catch the vibe and a pack are lolling on the station concourse to welcome arriving visitors.

It’s time to head home. Our cable car excursion has been uplifting in every sense of the word. The kids have even stopped talking about food.

The downhill leg is as silent and smooth as the one that carried us up, and I am surprised to realise at El Tunal that our transfer to the Transmi buses comes at no extra cost: the whole journey from home to El Paraiso and back was under 5,000 pesos. That’s a cheap price to pay for paradise. 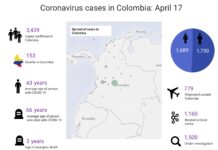 2019 in Colombia, the year in numbers