One of the many ways to immerse oneself in Colombia’s magical realism is to follow one of the country’s main arteries: the Río Magdalena. As the sun melts reality into fantasy, it brings the literary genre to life.

Mompox, Aracataca and Ciénaga are names that will quicken the pulse of any Gabriel García Márquez fan. Whether or not Gabo spun his words around these exact walls and streets, he is present in the slow pace of everyday life, the steady friendliness of the people and the cumulative magic of the Caribbean heat, sun, colour and life. Mompox is definitely the standout star, but there are other Gabo-related destinations to explore as well.

We set out on a Gabo pilgrimage to discover more about magical realism, travelling at first by river to Mompox. Not only did this seem more enjoyable than the long and trying roads, but it seemed more fitting, since the waterway was the reason the town was born.

We’re the only foreigners on the boat. The other passengers seem to take the ride with an air of indifference, oblivious to the throng of activity we devour with our eyes. It is a glimpse of river life along the Magdalena, one of the main arteries of Colombia’s pulsating ecosystems. There are fishermen throwing their nets into the water and women washing clothes on the banks. At small makeshift ports along riverside settlements, people rush to unload merchandise, fruit, clothes and even a motorbike.

Rows of banana fields pass us by. Lines of palm oil trees emerge – the new source of income for many departments. Cornfields also make their appearance, completing the menu. Banana, corn and fish: all crucial ingredients in the staple diet of the people living off the riverbanks.

The river really is the heart of Mompox. It gave life to the town, bringing business and wealth as the main link between the trade routes of the Andes and the Caribbean ports serving Europe. The streets were built in wave formation, reflecting the river’s curves as it meanders through the town. There is no main square. Instead, roads lead towards the water, and are even named according to their proximity to the banks.

On a guided tour, we see the town as it was in its sixteenth century heyday. The high wooden roofs, great inner courtyards and windows clad in iron embellishments all reflect the wealth once housed here. But one day the river decided it had run its course in the town. The silting of the river meant that the town’s trade routes had to move from water onto land, and the massive influx of riches ebbed away with the water. It is this detachment from main routes of commercial traffic that has contributed to the conservation of the traditions, colours and architecture that we see today.

Despite such reduced economic growth, Mompox is not a ghost town. New forms of activity have moved in, such as the workshops of filigree, fine metal work. The art of making this handcrafted jewellery is highly intricate, and suited to the Mompox spirit, as it requires delicate manual movements, patience and time. As we peer over the shoulders of one jewellery maker, hardly daring to breathe lest we disturb his concentration, we can’t help but connect the multitude of twirls and curls in the filigree designs with the waves and curves of a river.

This is a place lost and found in its own time. The cyclists move so lethargically that they seem in danger of toppling over at any second. This sense that time has almost stopped – yet continues with its own rhythm – is perhaps what makes Mompox the embodiment of magical realism for many visitors. The passing of time is no malicious force here, as past, present and future mix harmoniously together.

Perhaps, though, the magic comes from the colours of the houses, as vibrant as the lush green of the swamps that Mompox is nestled amongst, the tranquillity of the slow-flowing river, and the accompanying songs of the birds flocking to the swamps.

The attraction of Mompox is such that you yearn to stay and lose yourself in its quiet streets. But – like any dream – you know that for your own sanity it is only wise to continue on your way; and so on we went.

What Gabo journey could ignore the town where the great writer spent his formative years, under the shadow of his grandparents?

The author’s former house is now a small museum that pays homage to his birthplace. There are quotes from Gabo’s books and memoirs paying tributes to his grandparents, whose guest-friendly house with its open door policy provided him with plenty of artistic material. As we wander from room to room, the heat is suffocating, and it is easy to see how the trickster sun planted magic in the mind of a young Márquez here.

The director of the house is a knowledgeable professor, who weaves the fictional tales of Gabo’s Macondo into Aracataca’s real history as he leads us down the deserted streets. He tells us how the town’s position as a main hub of one of the big banana companies once attracted industry and different nationalities. Narrating some of Gabo’s short stories as we walk, he points out houses, bridges, and even people who used to live here, and bear similarities to some of his plots. It feels like you’ve stepped into the making of one of these stories. Our imagination works overtime to keep up and differentiate between the end of one tale and the beginning of another.

Our final stop is the banana heartland of Ciénaga. It was the banana massacre and strike here in 1928 that inspired One Hundred Years of Solitude. Almost a century later, banana palms still dominate the landscape, stretching as far as the eye can see.

We can feel that we are closer to the Caribbean coast. The roads are busier, with street vendors selling fruits in the midday sun. Barbershop customers perch on the roadside in Águila-sponsored chairs, which, in a more urban setting, we would call pop-up shops. These roadside posts may lack the hum and buzz of a city, but they make up for it with large stereos and plenty of Caribbean tunes. Each establishment vies with its neighbour for musical dominance.

There’s no doubt that magical realism was born in this region. As you travel, you start to see the extraordinary in the ordinary: In the everyday smiles; in the freshness of the fruit; in the ritual street activity; in the repetitive musical rhythms; in the eternity of the heat and the steadiness of the sun. It is a trip that connects you to the infinite endings of any one tale and to life’s infinite sources of possibility. 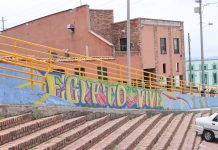 Breaking borders tours: ‘You can’t leave, but you can change’