The recent arrivals – many of whom have walked 20 days from the border – are mostly grateful for the help and compassion they received on the way. “Thank you Colombia,” is their refrain. We saw for ourselves the groundswell of people, especially the church, who were providing assistance to those camped out at the bus station.

But while many empathise with the migrants, a number of locals also fret over the large number of Venezuelans thrust into their neighbourhoods.

“Why do they want to come here? We’re full up. The government should shut the border to keep them out,” said a café owner near the bus terminal. Behind him, migrant families lugged battered suitcases along the pavement.

It is hardly surprising to hear the seemingly world-wide refrain of “they’re taking our jobs” and fears of the consequences of adding more people to the already overburdened health and education systems.

Especially here in Bogotá where millions of residents already face a hardscrabble existence. Many are themselves victims of displacement from Colombia’s conflict zones. Petty and violent crime are the constant preoccupation of families living close to the breadline.

Ana, a door keeper from San Cristobal accused Venezuelans of “attacking us in our neighbourhood, they wait for us with knives and take everything” she said – though she admitted it has not yet happened to her. “The neighbours tell me,” she clarifies.

“They’re lazy because their state used to give them everything,” said Antonio, who sells ice-creams in Teusaquillo. “All that oil money. They never had to work, so now they’ll take what we have,” he added.  His friend Mauricio picks up the thread: “Those venecos who beg at the traffic lights came back at night and robbed the restaurant on the corner.”

And how can you be sure it was Venezuelans? we ask. “Security cameras caught them. They were wearing shorts,” explains Mauricio.

The narrative that Venezuelans are behind so much of the crime in Bogotá (never the safest city at the best of times), with or without short trousers, has taken hold both in the rich estrato 6 gated communities and the less safe barrios populares. As expected, this xenophobia shows its darkest side on social media.

“They’re a plague. We must give them some lead. Let’s go and do some cleaning,” say various posters. There are thousands of similar barbs using the tropes of ‘social cleansing’ which all too often manifests as real violence.

But while some criminals have undoubtedly filtered in with the migrants – like Bogotá, Caracas was a crime-ridden city long before its recent troubles – as the stories here show, most are just ordinary people trying to survive.

There are also many bogotanos who recognise the desperate needs of the arrivals and don’t see them as an enemy. This is particularly true for Bogotá Post contributor Ángela Forero after a young migrant helped her out.

“My phone was snatched on the Transmi, then a Venezuelan lad selling candies chased the robber, tackled him and handed my phone back,” she told us this week. “That’s one story I want to get out.”

“It is discrimination that is forcing many Venezuelans to live off the street”, says Oli, a musician who has collected old clothes to donate. “You cannot generalise about them,” he says, recounting a Venezuelan cellist he knows who once worked with the national orchestra now busking in downtown Bogotá. “He was one of the country’s best, now getting coins.”

Others see a historic debt owed to Venezuela, where for decades millions of Colombians migrated for better opportunities or sought refuge from the conflict.

“For years they took us in, now we must help them back,” says Janeth, a retired bookkeeper who with others has been handing out free snacks and hot coffee in areas where migrants are arriving in the city.

Sadly, these voices of reason do seem to be a minority. It will be an uphill battle to stop discrimination, or worse. One initiative taking root is Somos Panas Contra la Xenofobia, (we’re buddies against xenophobia) promoted by the UN’s refugee agency, UNHCR, connecting with social groups across the city to spread tolerance with a website which has guidelines and a kit on how to counter hate speech.

For the anti-xenophobia kit see www.somospanascolombia.com 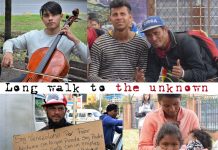 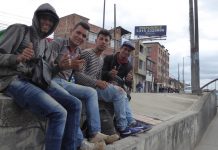